Caldera Records, founded in 2013, has been dedicated to releasing international soundtracks in editions that offer the highest qualities. Every edition of a released soundtrack features a detailed booklet-text, an exclusive audio-commentary by the composer and an elegant artwork to enhance the appreciation of the art of the best current soundtracks from around the world, making our products to precious study objects – the best way to enjoy good film music! 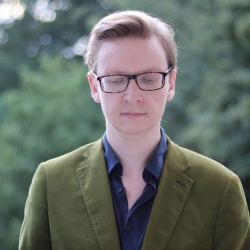 Stephan Eicke was editor-in-chief of the European film music magazine Cinema Musica for nearly ten years. Furthermore, he writes booklet-texts for CD-releases and reviews as well as articles for the established magazines ray and Splatting Image. He wrote the music for the successful audioplay series “Sherlock Holmes: Die neuen Fälle,” which counts nearly 60 episodes, and “Sigurd – Der ritterliche Held.” In 2019, his book “The Struggle Behind the Soundtrack” was published by McFarland. It carefully examines the current working conditions for composers in the media. He is the co-founder of Caldera Records and produces the CD-releases from the first until the very last step in production.

John Elborg is co-founder of and executive producer for Caldera Records. In 2005, he took over First Floor Entertainment from Richard Kummerfeldt and thus became the CEO of Alhambra Records, a subsidiary of First Floor. In 2013, John Elborg also co-founded Torus, a label which is specialized in (instrumental) electronic music.