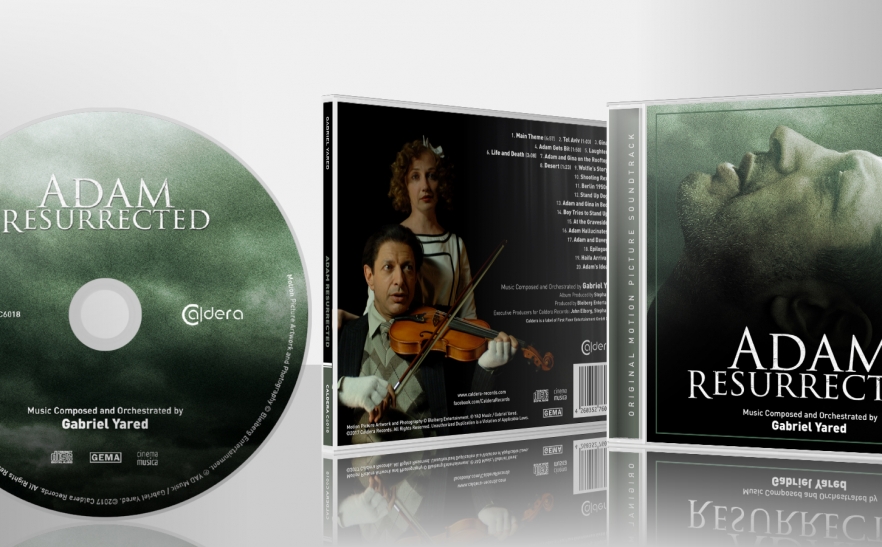 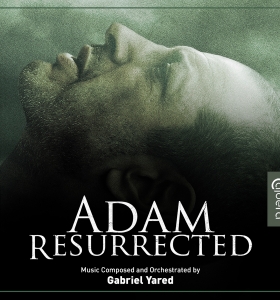 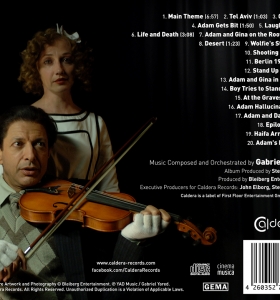 Caldera Records is proud to present the original score for the motion picture “Adam Resurrected” from 2008, directed by Paul Schrader and starring Jeff Goldblum, Willem Dafoe and Derek Jacobi. Goldblum stars as Adam Stein, a clown who is sent to a concentration camp in WWII. There he meets Commandant Klein, played by Willem Dafoe, whose dog Stein pretends to be by behaving like an animal. After the war, Stein is sent to a mental asylum where he meets a young boy who pretends to be a dog. This encounter brings back old memories for Stein which will haunt him forever. The film is based on a novel by Yoram Kaniuk and was directed by none other than Paul Schrader, the enfant terrible of the New Hollywood and the man behind the scripts for “Taxi Driver” and “Raging Bull”. The music was written by Gabriel Yared who delivered one of his most unusual and daring works and also one of his most satisfying. Yared, who won an Oscar for his work on “The English Patient”, wrote the score for an orchestra but later abandoned the idea to create a score which wouldn’t make the film into a schmaltzy melodrama. Instead, the composer used a solo piano, solo violin, solo guitar and solo cello to come up with the right tone for the film. These instruments are accompanied by electronic textures, bringing back memories of Yared’s earliest scores from the 80s which are developed further here. The French-Libanese musician melts the sorrowful main theme of the film, beautifully played by Bogdan Vacarescu, with sometimes harrowing and sensual electronic counterpoints, fusing score and source music and thus delivering one of his most original and complex works which is deeply touching even outside the film. The music was recorded at Abbey Road in London and is now available for the first time on CD. The 18th CD-release of Caldera Records features a detailed booklet-text by Gergely Hubai and elegant artwork by Luis Miguel Rojas. The CD was produced by Stephan Eicke and John Elborg.

Reviews:
“The composer develops his work in two distinct dramatic ways which don’t intersect but somehow engage in a dialogue that is gaining significance during the film. First there is the music for the apocalypse and horror of Nazi concentration camps; broken music, toxic music which creates an atmosphere where it’s unable to breathe. We fully enter the psyche of the protagonist, who is being driven mad and poisoned. The Kafkaesque nightmare consists of other music as well, which portrays the goodness, dignity and honor of the main character. Although these cues are afflicted and fragile, they are a light in the darkness, the oxygen that keeps the character alive with an emotional main theme.”
MundoBSO

“The man clearly follows his own instinct and has a truly unique musical voice, and I admire that greatly. It’s because of Yared’s unique voice that you can never be too sure where the music will take you. And with Adam Resurrected… well, there are elements I don’t agree with, yet I find myself intrigued (and indeed: immersed) by Yared’s sound palette.”
Synchrotones

“This is one of those scores that feels like it’s over way too quickly. There’s a lot of depth here that make this a soundtrack worth adding to your collection.”
ReviewGraveyard

“Gabriel Yared is an amazing artist and here for ‘Adam Resurrected’ it’s a great challenge to pull off music for a serious film, yet managing to keep us entertained and never loosing the heart of the film. It succeeds as we are drawn into the compassion and strength that is needed. Bravo… and thank you for this wonderful piece!”
Six Strings

“This is almost a concerto for violin, cello and electronic orchestra. It is not easily accessible, sometimes stifling or even oppressive at times, but the writing is precise, to the point of being clinical. Better to be warned.”
Underscores

“It’s a very quiet, introspective score, but one immersed in feeling and humanity, very well preserved and presented on his CD from Caldera. It’s also quite a deft mixture of acoustic soloing and contemplative electronica.”
BuySoundtrax