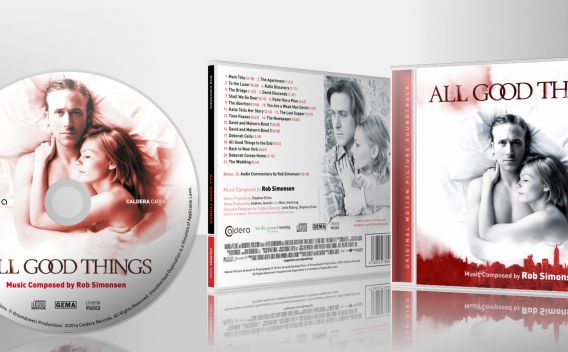 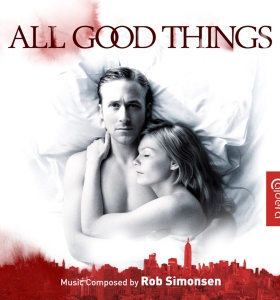 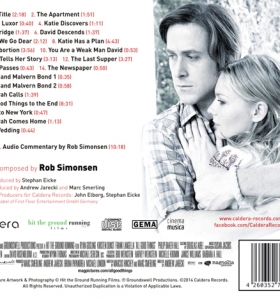 Caldera Records is proud to present the original score for the thriller All Good Things from 2010, starring Ryan Gosling and Kirsten Dunst, directed by Andrew Jarecki and featuring a score by Rob Simonsen (The Spectacular Now, The Way, Way Back). The movie is based on the true story of David Marks who eventually killed his young wife Katie but was never prosecuted for his crime which remains one of the most famous unsolved murder cases in recent history of the US. Simonsen’s score is both tender and chilling, describing the troubled relationship between David and his wife with a melancholic yet romantic main theme and driving, aggressive, rhythmically inspired cues for orchestra. All Good Things is an elegant, symphonic work with a memorable theme and several well-constructed motifs which make the CD an entertaining listening-experience – it was high time that this score got his well-deserved release! As a bonus, we included an insightful audio-commentary by Rob Simonsen who talks about his beginnings as a film-composer and the concept of this specific score. The fourth CD-release of Caldera Records features a detailed booklet-text by Gergely Hubai and elegant artwork by Luis Miguel Rojas. The CD was produced by Stephan Eicke and John Elborg.

“Simple-hearted and elegant creation with a beautiful main theme and evocative air in some of its melodies, both the dramatic as in the sentimental. It is solidly structured and has very elegant moments.”
Conrado Xalabarder, MundoBSO.com

“The music is so full of dramatic life – when I said above that Simonsen’s score is a little surprising, that’s because I was expecting it to be in a slightly detached, documentary style, but have no doubt about it – this is a full-on dramatic film score, colours so well-defined.  There are slight hints at times of Philip Glass, Danny Elfman at others, and I’m impressed by how bold the composer was prepared to be in what was the biggest film he’d scored solo up to that point.  All Good Things is indeed impressive on every level and comes with a strong recommendation.”
James Southall, Movie-Wave.net

“Simonsen’s work on the Danna brothers-scored Gosling courtroom thriller “Fracture” certainly paid off here as lush, Hermann-esque seduction pulls Katie into a spider’s web of the twisted Manhattan rich, gossamer chords capturing both the elegance of their lifestyle, as well as the victim-to-be’s growing sense of anguish and betrayal. It’s gorgeously melodic, spellbinding stuff that soon takes on a harsher, classical edge with militaristic percussion, sinister plotting that’s captured in an elegant, piano-driven melody and slashing violins as the music gets across a well-bred murderer cunningly covering all of his bases for a perfect crime. Simonsen’s “Good Things” are gripping from soft start to its intellectually nasty finish for this auspicious feature score, one that makes the anticipation to hear what Simonsen will cook up for his upcoming killer millionaire score to the already-acclaimed “Foxcatcher.” Caldera Records has brought forth Simonsen’s first score in the genre with another impressive release for the label, with Gergely Hubai’s liner notes, and an audio recording of Simonsen himself revealing the facts behind the musical crime scene, even as the actual “Katie”’s sad whereabouts remain unknown.”
Daniel Schweiger, Filmmusicmag.com

“Simonsen explores a different genre, the thriller, where each group of instruments is beautifully exploited through
detailed orchestrations. A real surprise!”
Olivier Desbrosses, Underscores.fr

“I really liked “All Good things” and I am happy that I have a chance to get to know Rob Simonsen and his music even better. I also love that Caldera Records includes audio commentaries from the directors in their releases. It is a very welcomed addition and I wish more labels did this.”
Soundtrack Dreams.com

“All Good Things is a solid thriller score with some exciting music to be found. It is a matter of taste obviously. I’ve never found the attraction to thriller music with a few exceptions. This is definitely one of the better thriller scores I have heard though which says something.”
SoundtrackGeek.com