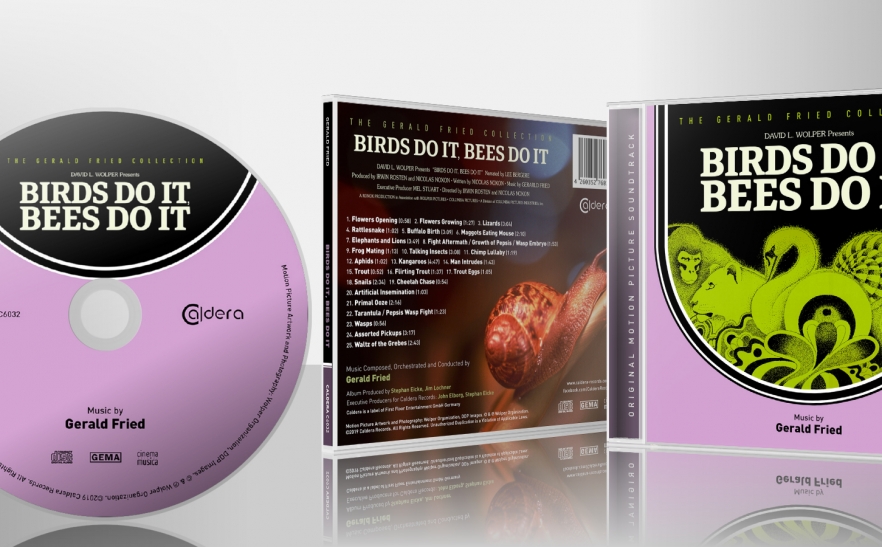 BIRDS DO IT BEES DO IT 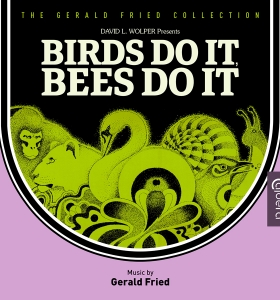 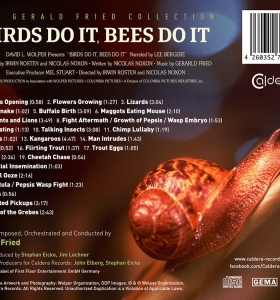 Caldera Records is proud to present Gerald Fried’s Oscar-nominated score for the motion picture “Birds Do It, Bees Do It” from 1974, directed by Nicolas Noxon and Irwin Rosten.
Narrated by Lee Bergere, a beloved actor who had guest roles in every major television series in the 60s (including “Star Trek”), “Birds Do It, Bees Do It” examines the reproductive habits of bacteria, frogs, lions, kangaroos, elephants, monkeys, birds, rhinos, and others by showing in graphic detail how animals behave before, during and after sexual intercourse. The documentary did not shy away from its sensitive topic. Instead, it discussed sex as a natural part of life and aimed to educate its viewers. In fact, several college campuses decided to show the film to its students in the mid-70s, using the moving images of copulating animals as an educational tool.
Fried had already worked on a number of Wolper productions when he was offered to score the documentary. It would be one of the most satisfying experiences of his career. Not only was he not subjected to a hair-rising deadline, he also had sufficient funds to execute his creative vision. When he saw the rough cut for the first time, the germ of an idea evolved – human beings portrayed in the film would musically be treated with tonal themes (Man Intrudes), while animals would get less organized, less thematic, but nonetheless tonal music (Kangaroos). Insects would be portrayed with electronic music and/or percussion instruments (Talking Insects), amoebas only with noises produced by synthesizers (Primal Ooze). In 1976, “Birds Do It, Bees Do It” received an Oscar nomination for Best Dramatic Score. It failed to win, but Gerald Fried’s glorious music for Birds Do It, Bees Do It stands the test of time and is not only one of Fried’s very best scores but also one of the best scores ever written for a documentary.
The 32nd CD-release of Caldera Records – a world premiere – features a detailed booklet-text by Stephan Eicke and elegant artwork by Luis Miguel Rojas. The CD was mastered by Richard Moore and produced by Stephan Eicke and John Elborg.

Reviews:
“Only one documentary has ever been Oscar-nominated for its musical score: this 1975 David L. Wolper production on the mating habits of animals, composed by Gerald Fried (who would later win an Emmy for Wolper’s Roots). Fried’s early example of a hybrid score — partly electronic, partly orchestral — served the little-seen doc perfectly.”
Variety

“The contrast between the creepily electronic (“Aphids,” “Fight Aftermath/Wasp Embryo”) and the majestically orchestral (“Chimp Lullaby,” “Elephants and Lions”) and diverse nature in between makes for a very fine and thoroughly delightful listen, bookended by the glittering “Flowers Opening” at the start and the elegant “Waltz of the Grebe” at the conclusion. Highly recommended!”
BuySoundtrax

“What struck me most about this release was how varied and intricate each of the themes were. While not all of them instantly seem to fit with the animals they are depicting this is mainly down to the fact that Fried steers clear of cliches as much as possible. ‘Wasps’ is an obvious exception to this, as the track opens with an eerie buzzing sound. This is another winner from Caldera. Long may they continue to unearth long forgotten gems like this.”
ReviewGraveyard

“Great score, some tracks are little freaky [good way]… I was listening as I worked around my house and at some-point I was immersed in the music I stopped working. It’s been a very long time since I was taken away into the music, very nice.”
JMHDigital

“The composer wrote pure poetry; open and beautiful music in various styles [...] There is also more experimental music, avant-garde and electronic, which is unorthodox and tries to capture animals in a musical language.”
MundoBSO