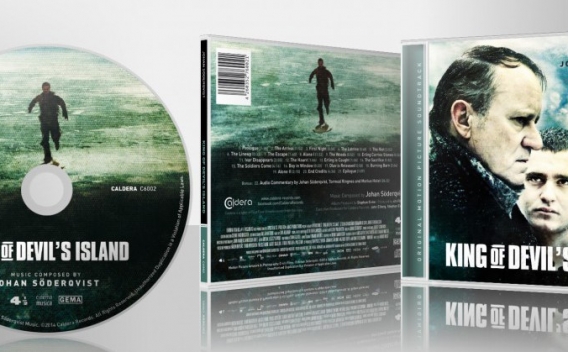 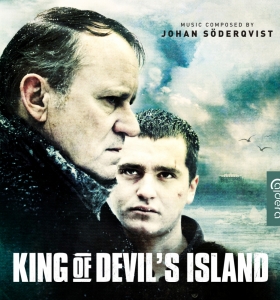 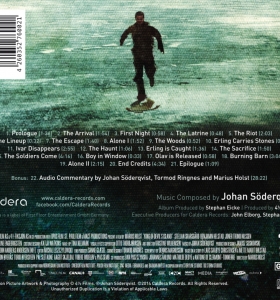 Caldera Records is proud to present the original score for the well-received Norwegian production King of Devil’s Island from 2010, starring Stellan Skarsgard and featuring one of the best scores of acclaimed composer Johan Söderqvist (Let the Right One In, Kon-Tiki). The movie tells the (true) story of a group of teenagers who are prisoners on the Norwegian island Bastoy and who start to rebel against the authorities. The movie earned several awards, including the Amanda Award (Norway) in 2011 for Best Original Score. Söderqvist wrote an ice-cold, chilly and eerie orchestral score which may be the saddest music you have ever heard. With a strong main theme, which is presented in variations both for Hardanger Fiddle and piano, the composer evokes the snow-white landscape of Bastoy musically, using unusual instruments such as the Contrabass-Willow Flute, the Clayflute and the Electric Baritone Guitar. As a bonus, we included an insightful audio-commentary in form of a half hour discussion with composer Johan Söderqvist, sound-designer Tormod Ringnes and director Marius Holst who discuss both the music and the movie in detail. The second CD-release of Caldera Records features a detailed booklet-text by Gergely Hubai and elegant artwork by Luis Miguel Rojas. The CD was produced by Stephan Eicke and John Elborg.

“Elegiac, sober and beautiful, the music, driven by strings, pays tribute to the most beautiful aspects in this story inspired by real events.”
Olivier Soudé, Underscores.fr

“One of the standalone highlights is the action track “The Riot”, the hardanger fiddle at the fore offering a constant rhythmic pulse and seeming to egg on the orchestra behind it, energetic and yet horrific; a kind of distant, otherworldly feel is felt through the throaty punctuations of the massive willow flute, another Norwegian folk instrument.  While the music has a foreground role to drive forth the action in that instance, at other times the composer offers a more withdrawn accompaniment – “The Escape” in particular is like a meditative reflection on the action, certainly not a direct commentary on it.  At other times it’s almost like being in a dream – “Ivar Disappears” is so slow, the pacing making it like a great icy river – you’re not moving fast but you still can’t find a way out – the musical signposting of tragedy quite clear.  This is even more true in “The Soldiers Come”, the music getting gradually larger and larger before the wisp of a melody grows like a sapling in a charred landscape.
The superb album features as a bonus an interview with composer Söderqvist, director Holst and the film’s sound designed Tormod Ringnes conducted by journalist Thor Joachim Haga and offers a fascinating insight into the score and its use in the film.  It’s rare to hear such an in-depth discussion of a film score from its composer and the filmmakers (the interview lasts almost half an hour) and it’s a great idea by the label to include one.  This is such a good album: the music is exquisitely-crafted, continually so evocative; the composer created a compelling atmosphere and executes it perfectly.  Musical storytelling at its finest, there isn’t a single flashy moment and yet the listener is absolutely gripped from start to finish as the story unfolds.  It won’t be for everyone by any means but for me the deep expressions of emotion played against the cold, harsh – sometimes even brutal – landscape are simply brilliant.”
James Southall, Movie-Wave.net

““King of Devil’s Island” is a beautiful and serious composition where the elegiac tone dominates and only finds release in the “End credits” when all other instruments die down and the solo piano plays the final notes.  This score is special and you will feel all the pain, sorrow, scares or rage of the characters. With only a few notes and instruments, Johan Soderquist introduced us into a world I wouldn’t want to be part of. He painted it so well that I can’t wait to get back to my real life once the score is over. “King of Devil’s Island” will leave and echo that will haunt you long after it’s over.”
Soundtrack Dreams.com

“This is a good score, a proper depressing and moody score, but in a good way. The sound is gritty, never clean, telling the story about these boys and the hell they went through on that island.”
SoundtrackGeek.com