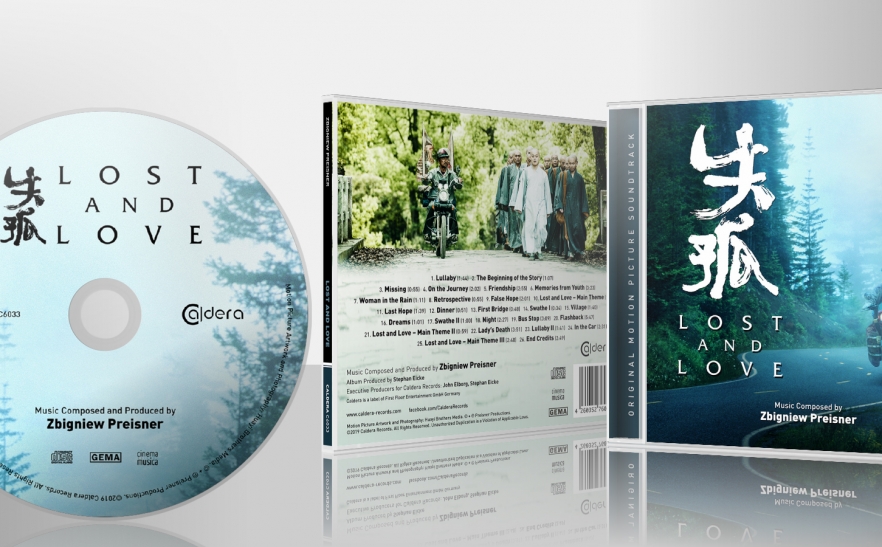 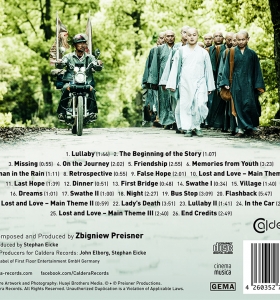 Caldera Records is proud to present Zbigniew Preisner’s score for the motion picture “Lost and Love” from 2015, directed by Sanyuan Peng.
“Lost and Love” tells a harrowing (and apparently true) story of loves lost. The love described in the film is the love between parents and their children. Andy Lau plays against type by portraying Lei, a poor fruit-grower. For 15 years, he has been searching for his child, traveling through the vast country in the hope of being united with his offspring. On his way from one end of China to the other, he meets up with a young mechanic who goes by the name of Zeng Shuai as played by Jing Boran. The latter is also searching, although not for his child but for his parents.
For her feature film debut, Sanyuan Peng chose Zbigniew Preisner as composer who wrote one of his very best works, a delicate and yet passionate score which is rich in themes and variations. Its most prominent theme is – fittingly – a lullaby which opens the album. It is a melody which recurs throughout the score in different metamorphoses. Not only did it fit the images on screen, it also captured the overall topic of the film. The main theme, as already briefly laid out in the prominent lullaby, can be heard most prominently in “Lost and Love – Main Theme”, carried by strings, while echoes of it feature in “Retrospective”. It is reincarnated in a variation for flute, guitar, harp and orchestra in the “End Credits”, which offer a glimpse of hope to the characters in the film and therefore the audience when it is given a passionate coda.
The 33rd CD-release of Caldera Records – a world premiere – features a detailed booklet-text by Stephan Eicke and elegant artwork by Luis Miguel Rojas. The CD was mastered by Leszek Kaminski and produced by Stephan Eicke and John Elborg.

Reviews:
“Artists seek to draw us closer to a state of consciousness that only they can evoke. From that deep place, Zbigniew Preisner’s music speaks to us. His music has touched our emotions deeply for decades. His melodies filter the light that breaks the darkness and illuminates the dark path we have to take on our return. Preisner’s ability to connect with the emotional part of our reality is once again manifested by listening to his heartfelt work Lost and Love.”
El Baùl de los Genios

Like with other works by Preisner, one can sense how he aims to reach purity through something beautiful and seemingly simple. (…) The developments are splendid and gratifying.”
Underscores.fr

“The music Preisner wrote to Shi Gu is a typical work of melancholy and beauty, full of veracious emotions, but not without minor traces that suggest melodrama. (…) The high-level quality that Preisner is able to produce for Shi Gu is befitting of one of the best actively writing composers. An absolute masterpiece.”
MainTitles.net

“Stunning theme, with a score that features so much musical character and it needs to be heard. I found myself enjoying each track, from next to next… it was worth it.”
JMHDigital

“Lost and Love is an expressive and engaging work with a sturdy classical structure; its tantalizing melodies evoking both sympathy and strength as the story proceeds along its course.”
BuySoundtrax

“Preisner manages to get under your skin and tug at the heart strings with his themes here, an impressive enough task if you can do it once in a score, but he does it so many times over the course of this album that it starts to feel effortless. It’s pretty obvious that the music is the heart and soul of the movie. If melancholic, beautiful scores are your thing… you’re going to fall in love with Lost and Love. It’s an album you’re very unlikely to tire of hearing and certainly one that will give you years of pleasure.”
ReviewGraveyard

“The composer wrote a beautiful, elegant and refined soundtrack, dramatic, lyrical and intimate. (…) The main theme is remarkable.”
MundoBSO

“There is a hauntingly beautiful musical entity present from the start, the composer’s abundantly melodic and heartrending tone poems filling and overflowing into each other. At first it seems as these are unassuming and simple pieces of music, but they have the ability to fixate and almost hypnotise the listener. There is a slightness and tantalising aura to them and a style and sound that it is impossible not to notice or be affected by.”
John Mansell