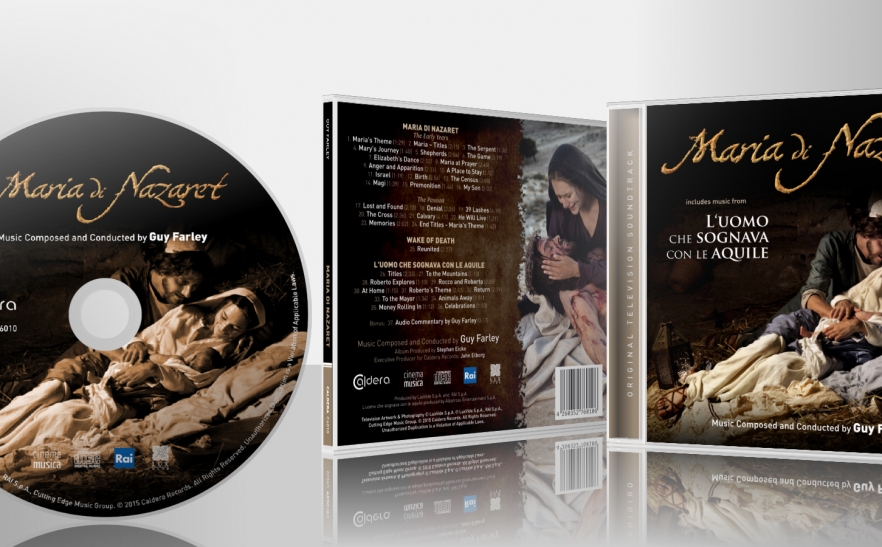 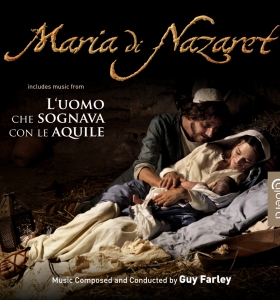 Caldera Records is proud to present the original score for the television movie Maria di Nazaret from 2012, directed by Giacomo Campiotti. The two part movie was a huge success in Italy as it recounts the story of Jesus’ mother Maria and accompanies her throughout the life of the son of God until his death on the cross. Maria was played by internationally acclaimed actress Paz Vega who rose to fame after her role in the Adam Sandler movie Spanglish. The music for Maria di Nazaret was written by British composer and conductor Guy Farley (Secret Sharer, Modigliani) who delivers probably his most diverse score to date, featuring lush orchestral melodies for orchestra and choir as well as female vocals and solos for ethnic instruments, played by Tony Hinnigan (Braveheart). Additionally, we included another score by Farley on the CD: L’uomo che sognava con l’aquile was written for an extensive Italian television production with Terence Hill which gathered raving reviews after its premiere in 2006. Also, we present a bonus cue with the much beloved track Reunited from the Jean Claude van Damme movie Wake of Death which receives its premiere release here. The tenth CD-release of Caldera Records features a detailed booklet-text by Stephan Eicke and elegant artwork by Luis Miguel Rojas. The CD was produced by Stephan Eicke and John Elborg.

Listen to an audioclip here: SoundCloud

“Maria di Nazaret is lyrical and emotional but also full of pain, very elaborate and careful with moments of beauty. The composer develops a humanistic perspective of the characters, emphasizing its importance but also underlining their conflicts, doubts and fears. It is a delicious soundtrack.”
MundoBSO.com

“Farley achieves a gorgeous sense of worship, paying due tribute at the altar of John Barry and Ennio Morricone in the first composer’s strongly thematic, writing and the latter’s blending of melody and dissonance. Most impressive is that Farley’s score for “Mary” (divided between “The Early Years” and “The Passion”) doesn’t overtly go for those ethnic biblical chestnuts that have become a bit cliché after “Passion,” subtly using tribal drums, diduks, flutes and voices that result in his own distinctive approach to Jesus. Farley shows a mastery of the orchestra and piano that might make some listeners think he’s been touched by a higher power.”
FilmmusicMag.com

“The label’s first release was Farley’s score for Secret Sharer and that was a very impressive album; this one is even better. His music seems to come from the heart and on this album is very rich and rewarding. Don’t let this one fall under your radar.”
Movie-Wave.net

“Guy Farley’s music is absolutely gorgeous and heart-felt. There are lush melodies aplenty here, orchestrated for strings, female vocals and various ethnic instruments. It’s a wonderful album and if, like me, you weren’t familiar with Farley before, then this is a great opportunity to get acquainted.”
Synchrotones.Wordpress.com

“Guy Farley shows his romantic side with an oldfashioned score that evokes the works of John Barry. The melodies, performed by 100 musicians, are simply sublime.”
Underscores.fr

“Guy Farley’s music for “Maria di Nazaret”, as well as “Wake of Death” and particularly “L’Umo Che Sognava Con l’Aguile” is absolutely gorgeous and heart-felt. It’s a wonderful album and if, like me, you weren’t familiar with Farley before, then this is a great opportunity to get acquainted. Caldera’s album comes with a wonderful booklet containing extensive liner notes and striking images from the film.”
Synchrotones.Wordpress.com

“For those that have followed Farley’s career to date, it will come as no surprise to discover that once again he delivers another collection of heart wrenchingly beautiful themes for Mary of Nazareth. What impressed me most about this album is that Caldera could have just included the score for Mary of Nazareth (it’s a respectable 53 min, 51 sec) but they went that extra mile and include additional content. This is a label that truly respects the composer and spoils soundtrack collectors.”
ReviewGraveyard.com

“Maria di Nazaret” is one of the most intimate and beautiful scores I’ve heard in a while. The subtle and melodic piano strokes are like drops of rain in the desert. You almost can’t believe they are real. The female choral parts give me shivers and the ambient moments are soft and intense like a prayer. Guy Farley wrote a musical fairytale that I just want to put in a glass globe and have with me all the time. I stand by the two names I mentioned in the beginning: this is a score John Barry would have written after a meeting with Ennio Morricone and it’s amazing to find a composer worthy of that legacy. Get this score and welcome it into your life…”
SoundtrackDreams.com

“Maybe in 20–30 years from now I can compare it to other great works such as Cinema Paradiso, I really believe this score has such staying power and in time could become a real classic. This is a score not to be missed at any cost. It should be cherished and universally loved. It’s the type of score that I thought was just a part of the past, but turns out there’s hope for our younger generations too if more scores like this is allowed to be released. Needless to say, this is a stunning score that ticks all the right boxes. Buy this CD and a box of tissues and you’ll be a happy camper.”
SoundtrackGeek.com

“The music, highlighted by vocal melisma supported by a massed string orchestra enhanced by a few solo ethnic instruments, all in an achingly lovely harmonious setting. Additionally, Caldera has included another television score by Farley on the CD: the 2006 drama The Man Who Dreamed With Eagles, 11 tracks, a very poignant and breezy melodic score, as well as a single track from the 2004 Jean Claude van Damme movie “Wake of Death”, the gorgeous “Reunited”, featuring piano, strings and a lilting female melisma, which receives its premiere release here. The extra tracks are very complementary to the Mary score and all together make for an excellent and well-filled soundtrack album.”
Buysoundtrax.com