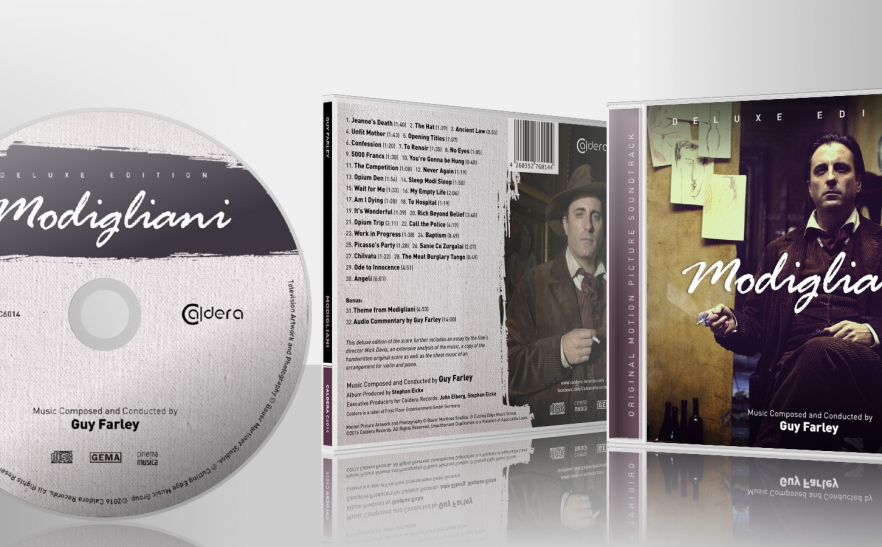 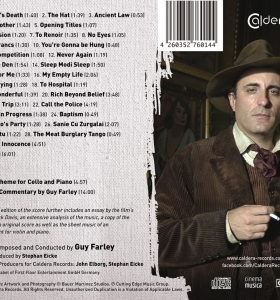 Caldera Records is proud to present its newest CD with a deluxe edition of “Modigliani” by Guy Farley.”Modigliani” is probably the best known score by the British composer whose scores “Secret Sharer”, “Maria di Nazaret” and “L’uomo che sognava con le aquile” were already released on Caldera. Indeed, the score for the 2004 movie by Mick Davis starring Andy Garcia has a special place in the heart of its composer and is without doubt his richest work as it combines sensual symphonic compositions, ethnic music and arrangements of songs by Sasha Lazard. The main theme from “Modigliani” is a favourite of many soundtrack fans and probably Farley’s most beloved composition to date. The soundtrack was released ten years ago by Milan Records but the CD sold out quickly and can be found rarely on eBay and only for high prices. Because of that, we not only decided to re-release the score but also to give it a special treatment. The CD features a different presentation of the score than the Milan CD as we were never happy with the sequencing of it. Furthermore, it offers lots of special bonuses and a running time of over 70 minutes. The 14th CD-release of Caldera Records features a detailed booklet-text by Gergely Hubai and elegant artwork by Luis Miguel Rojas. The CD was produced by Stephan Eicke and John Elborg.

- different sequencing than the Milan CD
- including several cues never released before
- an extensive essay by the films director Mick Davis about working with Guy Farley
- an arrangement for violin and piano as written score
- a new recording of the key themes for cello and piano, recorded at AIR Studios in London
- the handwritten score for the main theme included in the booklet
- an audio commentary by Guy Farley
- complete new mastering resulting in better audio quality

“Guy Farley’s approach reminds you of Desplat: The music is sensitive and moving, the orchestration sleek and stylish with a deep melancholy and a certain kind of innocence. Beautiful music but not recommended if you are chronically depressed.”
Underscores.fr

“It’s a beautiful and intricate score that straddles the line between soundtrack and classical music. If you’ve been unable to add this to your collection, now is the perfect opportunity and if you already own it there is so much added material on display here that you’d be a fool not to pick this edition up.”
ReviewGraveyard.com

“The music flows like a quiet and dark river that gathers thoughts and feelings from every area it passes. I will soon run out of ways to compliment the elegance, beauty and sensitivity in Guy Farley’s music. Rarely has a composer been able to affect me in such a way. He can write emptiness in the most fulfilling of ways. If you know how Guy Farley writes, this score will be at the top of the list. If you enjoy beautiful and meaningful orchestral music, even if you’re not film music fan, you will keep this close to your heart. With piano and string sections that can melt ice, with ravishing flute passages and with subtle oriental inserts woven in the fabric of the score to show the opium addiction, “Modigliani” will sit proudly in any music collection. As always, Caldera offers thoughts by the composer at the end of the release and I wish more labels provide this kind of insights.”
SoundtrackDreams.com

“The soundtrack was originally released by Milan in 2004 in a 22-track presentation that quickly sold out. A dozen years later and a proper release, carefully resequenced and remastered by Caldera Records, really gives Farley’s score its proper delivery on disc, with 30 tracks, a new arrangement of the main theme for cello and piano that Farley did especially for the album, and a fascinating 18-minute audio commentary by Farley about how he got the job and worked with director Mick Davis on scoring the film. Moreover, the album booklet contains Davis’s own notes on working with Farley, general film and music notes by Gergely Hubai, and Farley’s own handwritten sheet music of the main theme.”
BuySoundtrax.com

“An eclectic score which contains classical and contemporary music.The main theme is very beautiful and finds its variations throughout, describing the development of the main character. Ethnic instruments give the score an additional colour.”
MundoBSO.com

“If ever a score that needed more… here it is. It is wonderful, the additional music makes it a stronger piece. Well done Guy Farley, the score follows with a passion that holds your attention in every note.”
Six Strings Magazine