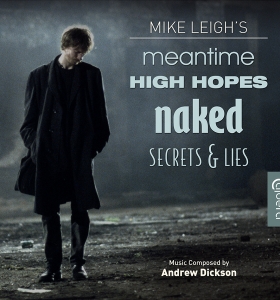 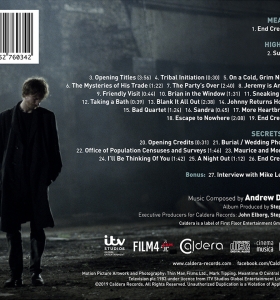 Reviews:
“Dickson’s score for Naked is as raw and relentless as the character’s narcissistic sexual appetite, driven by the incessant cyclical tension of Dickson’s harp ostinato. The music from the intense dramedy Secrets & Lies is given a despondently dejected jazz atmosphere which clouds the emotive texture of its melodramatic familial and social discourse, This collection is an affecting group of tone poems for damaged souls and lost compassions. Dickson’s mix of folk and jazz idioms saturates the glimpses of humanity that Leigh explores in these thoughtful films.”
BuySoundtrax.com

“[Naked is a] dramatic soundtrack that starts lyrical and becomes progressively clouded. It darkens and provokes an impression of emptiness and desolation.”
MundoBSO

“As we head to the end of the year, we get this treat and what I call a musical project that we needed from Mike Leigh’s collective works by composer Andrew Dickson. As the music tells a story from each project, I am finding a pleasant jazz feel into strong guitar that is only built up by the rest of the instruments. Then towards the end of the music, it’s subtle yet memorable to the ears and this serves as a solid collection of music.”
JMHDigital