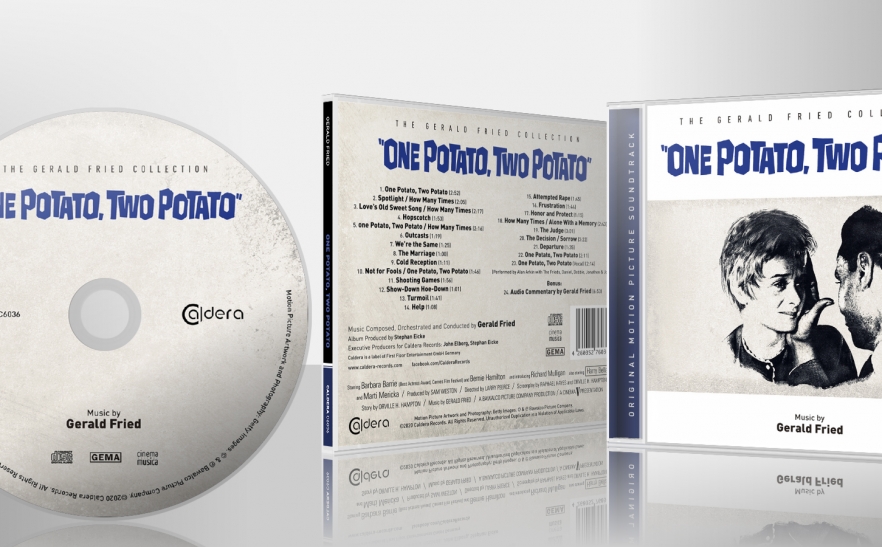 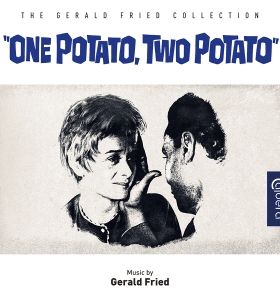 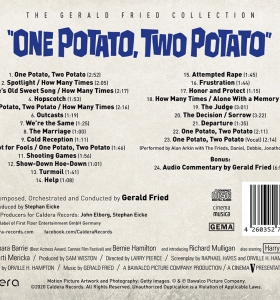 Caldera Records is proud to present the original score for the motion picture “One Potato, Two Potato” from 1964, directed by Larry Peerce, featuring music by Gerald Fried.
Peerce’s film, one of the first to discuss an interracial relationship openly in cinema, tells the story of a young single-mother named Julie (played by Barbara Barrie) who cares for her daughter all by herself after her husband abandoned her. Struggling with everyday life, she strikes up a friendship with Frank (Bernie Hamilton) who seems supportive and kind, giving Julie a respite from the nastiness she’s had to endure. It doesn’t take long for the two of them to fall in love. Although Julie and Frank are aware of the problems they are likely going to face as an interracial couple in the 60s, they decide to marry. Society, however, does not wish to grant them their happiness.
Surprising for an independent film without any major studio backing, “One Potato, Two Potato” scored an Oscar nomination for its screenplay.
As beloved as his music for both “Star Trek” and “The Man from U.N.C.L.E.” is, composer Gerald Fried considers “One Potato, Two Potato” one of his best works. It is a score which is dear to his heart, not least because the film tackles a subject that the composer felt strongly about. The memorable main theme makes several appearances throughout the album, at times playful and jaunty, at other times tense and introspective. As a contrast, Fried developed a sorrowful and yet warm lament as accompaniment for both Julie and Frank who try to overcome the various prejudices and other hurdles society presents them with. While there are several other motifs and themes in the score, the nursery rhyme serves as the backbone of the whole composition.
The 36th CD-release of Caldera Records features a detailed booklet-text by Stephan Eicke and elegant artwork by Luis Miguel Rojas. The CD was produced by Stephan Eicke and John Elborg.

Reviews:
“The composer carefully develops his dramatic score, structuring it around a traditional nursery rhyme with several variations. The conflict of the film is thus transferred to the music.”
MundoBSO

“The Caldera crew have done a remarkable job (I’d be surprised if they hadn’t, this is Caldera after all) of presenting the music in the best way possible. The sound quality of the recording is as perfect as you could hope for, and the tracks are presented in a way lets the music and themes build slowly.”
ReviewGraveyard

“It’s what you would expect from composer Gerald Fried, getting the full on treatment of whimsy and then to serious tones. Gerald Fried and Caldera Records get an A++ and + for this 1964 score, you all need to seek this one… it’s worth it!”
JMHDigital

“It all sounds delicious. Everything is fresh and light, the menu prepared by a real chef. The theme of this highly addictive score stays in your mind for a long time. I take my hat off to Caldera who continues to edit Fried’s works.”
Underscores

“The score makes for a very pleasurable listen; its main theme a pure delight and its more dramatic moments intense and affecting.”
BuySoundtrax