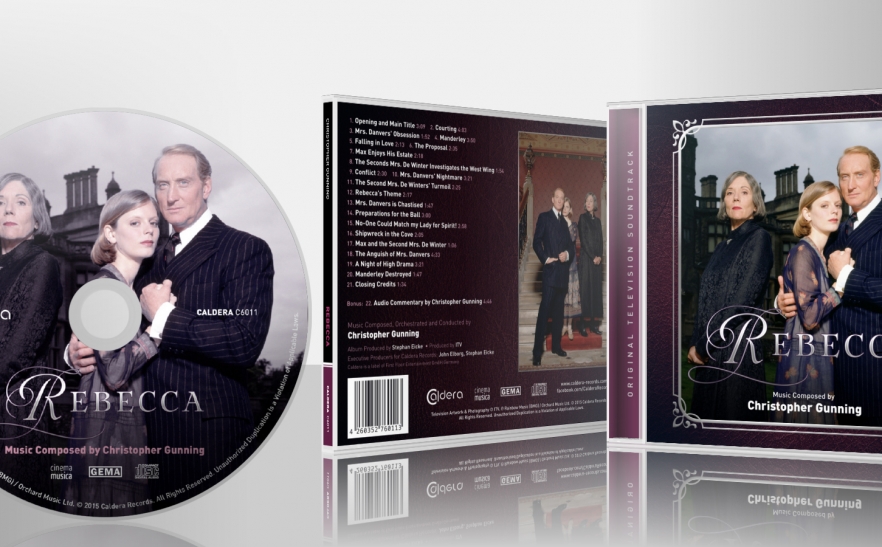 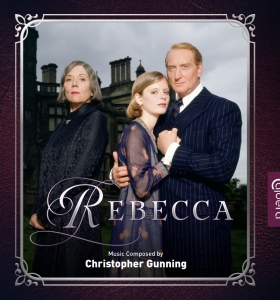 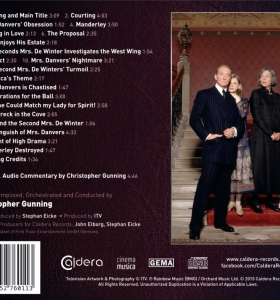 Caldera Records is proud to present the original score for the television movie Rebecca from 1997, directed by Jim O’Brien and starring Emilia Fox, Charles Dance, Faye Dunaway and Diana Rigg. The movie is based on the famous novel of the same name by Daphne du Maurier which had already been made into a successful movie by Alfred Hitchcock in 1940. It tells the tragic love story between a rich gentleman and his second wife who not only has to cope with an obsessive and evil housekeeper but also with the shadow of the first wife who obviously died under strange circumstances… Christopher Gunning wrote one of his most beautiful and rich scores for this adaption, capturing every aspect of the story in his music. While there is a dark and melancholic main theme, the romance between the (happy) couple is described in a lush melody for the full orchestra which receives its variations throughout the whole score. The tense moments in the movie are accompanied by aggressive outbursts from the orchestra, often featuring prominent, difficult and expressive solos from the cello. Christopher Gunning himself thinks of Rebecca as one of his very best scores and we are glad that you can finally see for yourself that it is indeed – but even more than that: it is one of the most diverse and inspired scores ever written for television. As a bonus, we included an exclusive audio commentary by the composer where he talks about his work. The eleventh CD-release of Caldera Records features a detailed booklet-text by Gergely Hubai and elegant artwork by Luis Miguel Rojas. The CD was produced by Stephan Eicke and John Elborg.

“Old-fashioned in the best sense of the modern gothic word, “Rebecca” is a superior, lavish score (astoundingly only performed by thirty musicians) from a composer who knows how to play picaresque romance amongst the well-heeled, music that sounds more alive than ever given Caldera Record’s sophisticated presentation, with Gunning himself summing up his stirringly passionate masterwork in his own, soft-spoken words.”
FilmmusicMag.com

“With a thematic main theme overflowing with yearning, passion, and hidden malice, Gunning’s symphonic score is simply magnificent, capturing the impassioned love story at the story’s heart with a rich melodic beauty and exuberance while signifying its moments of tension, doubt, and malevolence through a more aggressive musical stance and some finely nuanced measures from solo cello, masterfully played by Moray Welsh. The score’s expressiveness is enthralling. Gunning himself thinks of Rebecca as one of his very best scores and it’s first ever release on album is to be treasured.”
Buysoundtrax.com

“Well, romance is in full bloom. It sounds beautiful and epic, just like a true romance should be. It is a welcome release, a wonderful release in fact with every cue filled with awe and wonder. Top quality all the way and then some.”
SoundtrackGeek.com

“Christopher Gunning’s score for Rebecca is in short an extremely impressive work, especially when you consider it was composed for a television production, and worthy addition to any soundtrack collection. The score has enormous narrative clarity through its precise and memorable themes, powerful orchestrations, excellent crystal clear recording and musically bold handling of the subject matter that translates into a very enjoyable and listenable album that brims with musical drama. This is top notch stuff!”
FilmsonWax.co.uk

“Christopher Gunning pulls out all the stops to turn in one of the most beautiful and intricate scores I’ve heard of late. I’ve been listening to this almost constantly over the past two weeks and every time I play it there are numerous moments where a shiver runs down my spine. This is another impressive release from Caldera Records and certainly one that’s worth adding to your soundtrack collection.”
ReviewGraveyard.com

“I get a special kind of feeling inside when a Caldera release comes along. They have specialized in gems that really move me and I can easily name each of their releases from this year because they’ve all been amazing. This is one of my favorite record labels and I’m happy to get a chance to review their scores. “Rebecca” is the kind of score that only Caldera could have released. You don’t hear many scores like this one these days. This is pure orchestral bliss from start to finish… it is one of the most beautiful, dreamy and hypnotic scores I’ve heard in a long long time and also one of those compositions that make me travel back in time. Christopher Gunning gets as romantic as John Barry and paints a musical picture that will last forever. If you love orchestral emotions, run to get this one and treasure it. You’ll get a whole range of feelings from joy to sadness and from love to drama. A storm of beautiful music, turbulent and varied where the notes and instruments dance an eternal romantic waltz and I remain in awe long after the orchestra has left the building.”
SoundtrackDreams.com

“Beautiful themes and melodies, an elegant and rich orchestration. I almost fell out of my seat just by listening to the first piece. Do not miss it!”
Underscores.fr

“It is beautiful and romantic music with a wide range from the outrageous to the dramatic. It is refined and elegant and emphasizes the obsession with duality (love/danger).”
MundoBSO.com