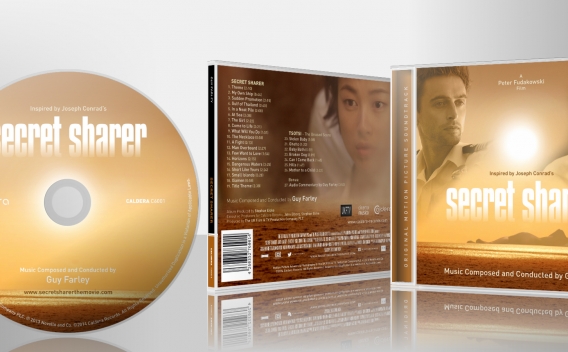 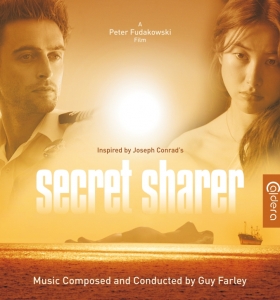 Caldera Records is proud to present the most recent score of British composer Guy Farley (Modigliani, The Hot Potato) in an exclusive deluxe-package: Secret Sharer, based on the short-story by Joseph Conrad, was directed by Oscar-winning producer Peter Fudakowski (Tsotsi) who describes a tender romance between a captain and an Asian refugee on a cargo ship, accompanied by Farley’s tender score which makes use of a Polish traditional and a strong, romantic main theme, bearing resemblance to the idioms of John Barry. The music was recorded at Abbey Road Studios in London. Additionally, the CD features selected cues from Farley’s unused score for the production of Tsotsi, directed by Gavin Hood, which has never been heard on CD before. While Secret Sharer is a traditional western-sounding score, Tsotsi makes use of African percussion, soprano, kora, marimba and orchestral strings, being even more tender than the main project presented on this disc. As a bonus, we included an insightful audio-commentary by Guy Farley, talking about his work on Secret Sharer. The first CD-release of Caldera Records features a detailed booklet-text by Gergely Hubai and elegant artwork by Luis Miguel Rojas. The CD was produced by Stephan Eicke and John Elborg.

Nominated for a Music+Sound Award 2015

“It is difficult to get out of listening to Secret Sharer, a great symphonic score, worthy of the greatest masters and whose addictive theme will waltz in your head for a long time. The music of Farley for Tsotsi was not retained by the production. Being very ethnic, the score here is largely recovered and been removed to expose in a dozen of minutes the quintessential contribution of the composer. Farley’s talent for mixing strings with Western African music through rhythmic acoustic proves remarkable. And then there is the overwhelming, crystalline voice of Nicola Emmanuel; when it resonates, it propels the beautiful music of Farley in the stratosphere. The packaging of the album is elegant, liner notes Gergely Hubai are precise and the sound quality is perfect. If each release proposed by the label appears in the same vein, we can only rejoice and wish good luck to Caldera!”
Olivier Soudé, Underscores.fr

“Anybody who enjoys a good soundtrack full of melodies and emotion is going to find it in Secret Sharer and Tsotsi, an excellent example of the above mentioned style of composition. I also hope that it makes people discover a marvelous composer who deserves a much bigger presence in our collections. Certainly, right now, this soundtrack would be the first recommendation that I have for anybody who wishes to get to know Guy Farley.”
Fernando Fernández, BSOSpirit.com

“A musician definitely worthy of discovery on this end of the pond, Farley has impressed in both thrillers (“The Flock”) and romance (“Cashback”). Now “Secret Sharer” showcases both styles with a beyond-lush approach for strings, harp, flute and piano, and later a fully turbulent orchestra. Starting off with a Polish-song based accordion waltz that captures a countryman adrift in Chinese waters, Farley creates an intriguing, sometimes soaring approach for two lost souls being brought together, mostly bonded by a gorgeous theme, whose dexterous variations nicely bring to ear the work of John Barry. Keeping a low musical profile even as the ship gets boarded, Farley uses such Oriental instruments as the shakuhachi and taiko drums, yet as musical spice to favor a mostly western approach, much like the sea captain who’s drawn to his exotic catch, finally giving way to more overt menace for the cat and mouse game between the couple and their pursuers. Caldera Records show much promise with this debut release, offering a well designed and written booklet by international score specialist Gergely Hubai, as well as an ending audio interview with Farley himself, who insightfully talks about taking an atypical course for “Secret Sharer” when the score threatened to veer off into familiarly menacing Asian musical waters.”
Daniel Schweiger, Film Music Mag.com

“My favourite of the score’s themes is introduced at in “In a Neat Pile”, a piano line tantalisingly hinting at the melody during the first half of the piece before it is revealed in its gorgeous entirety. With that thematic material – and no shortage of beauty amongst it – established during the first half, in the second, Farley must explore much darker areas.  If Secret Sharer‘s ethnic moments are rather subtle then Tsotsi‘s are far more overt, with the percussion and vocals making for a lively evocation of contemporary South Africa.  It’s pretty dark music in the main but dramatically compelling and highly listenable, with some moments of beauty and passion, particularly the outstanding pair of cues that conclude the suite, “Hills” and “Mother to a Child”, which are really rather moving.  The album ends with another nice touch, a four-minute interview with the composer in which he talks about his experience on Secret Sharer, an impressive score full of nice touches that are revealed more and more on repeated listens.”
James Southall, Movie Wave.net

“Farley has designed his SECRET SHARER music around a sublime primary waltz melody, introduced on the accordion and take by strings and winds; it captures a splendid nostalgic tonality befitting of the film’s period.  The main theme is given a number of attractive variations throughout the score, which also carries a predominant atmosphere of unsettling suspense, somewhat Herrmannesque in its use of fluidly shifting string patterns.  This brooding music shifts in and out of the main theme, which results in a pleasing contrast between the hovering ambiance of the suspense music and the more agile, melodic flavor of the theme. Farley’s TSOTSI score is a very beautiful work featuring a mesmerizing female melisma over an undercurrent of drums that suggest the film’s South African setting. Farley’s melisma theme is also taken by a soft flute; it’s a haunting, affecting melody, capturing a sad loveliness that resonates (or would have) with the film’s depiction of life in the slums and the titular character’s rising above it due to his caring for the infant entrusted to him due to his reckless crime; resolving in the soaring, redemptive arrangement of the final cue, which carries a profoundly emotional drive.   Both scores together form a serenely evocative listening experience.”
Randall Larson, Buysoundtrax.com

“Symphonic creation of classic air with a strong central theme that emphasizes the sense of adventure and epic, supported by some melodies similar line. The composer applies lyrical and dramatic themes to highlight the romantic components and the threat and danger that threatens the protagonists. The main theme, of love, is beautiful but very simple, at least compared with the strength of the adventure central theme, which although is narratively less relevant in the global discourse of the musical script ends up imposing.”
Conrado Xalabarder, MundoBSO.com

“It is however the highly melodic and romantic sounding themes that fill the score which attracted me to it. The composer uses the string section and also piano to purvey a sense of romanticism that is tinged with melancholy throughout the work, Farley also brings into the equation woodwinds, harp, horns and ethnic flutes and percussion. For me also there were little nuances and quirks of orchestration etc that gave the work a certain Barry-esque sound, the rich sounding strings and also the composer’s obvious gift to create haunting musical passages that are delicate, fragile and highly emotive bringing forth some beautiful and stunningly touching melodious pieces. This score is certainly worth having as I know that you will return to it many times to sample the highly emotive and poignant compositions.”
John Mansell, JonMan.com

““Secret Sharer” is the kind of score I always listen to with pleasure. It’s laid back but there’s a fire burning inside it and I can feel that. It’s romantic and melodic and I love how the instruments complement each other. Guy Farley wrote a sensible and soothing score that will work very well when the sunset comes on the sea shore and you’ve already been there for a few days.”
Soundtrack Dreams.com

“This is a pretty good and polished thriller score. It has the two main themes and a bit of thriller music that at times impresses.”
SoundtrackGeek.com