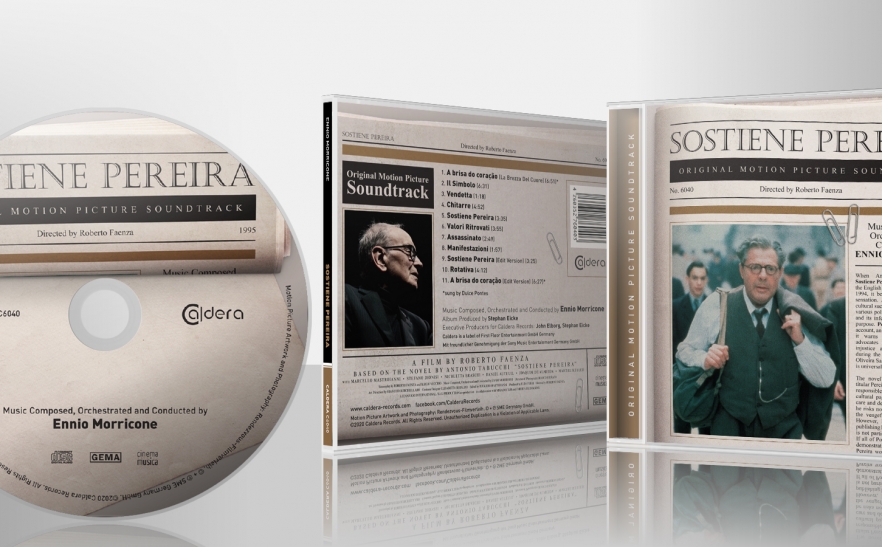 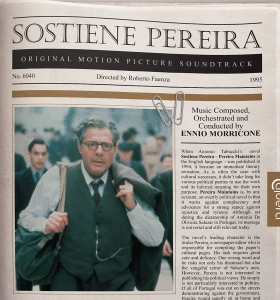 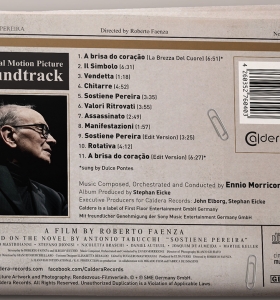 Caldera Records is proud to present Ennio Morricone’s music for Roberto Faenza’s film “Sostiene Pereira”.
When Antonio Tabucchi’s novel “Sostiene Pereira – Pereira Maintains” in the English language – was published in 1994, it became an immediate literary sensation. The novel’s leading character is the titular Pereira, a newspaper editor who is responsible for compiling the paper’s cultural pages. However, Pereira is not interested in publishing his political views. If all of Portugal was out on the streets demonstrating against the government, Pereira would quietly sit at home and read a good book. He is not a supporter but an enabler. His political reluctance is challenged when he meets a young man named Rossi. Pereira’s life soon changes radically.
Screenwriter and director Roberto Faenza was a perfect choice to turn the novel into a feature film. The Italian film maker had for decades depicted revolts against tyrannical governments. Here, he cast Marcello Mastroianni as the overweight editor who suffers from a heart problem. Popular French actor Daniel Auteil played Pereira’s doctor, Nicoletta Braschi (“Life is Beautiful”) and Marthe Keller (“Marathon Man”) were splendidly cast in minor roles.
The director had tasked Ennio Morricone with writing music for his feature debut “Escalation” in 1967, and they had worked together ever since. By 1995, their collaboration spanned seven films, eight including “Sostiene Pereira.” The latter is one of Morricone’s most ingenious works for a Faenza film. It is intricate and subversive, subtle and stimulating. For the first time, the composer worked with Portugese singer Dulce Pontes when they recorded the song “A brisa do coração” which makes its appearance several times in the film and is presented here both in its original form and in a shorter, edited version. His score subtly features Fado, a Portugese style of music in which a woman as the singer is accompanied by one or two guitars. Morricone’s score consists of several themes and motifs the composer cleverly weaves together. “Sostiene Pereira” starts with a rhythmic pattern for wood blocks, one that recurs throughout the score and serves as its backbone before several instrumental groups consecutively join in with various motifs. The score is intricately developed in that Morricone uses all these various separate elements in other cues but in different arrangements and constellations.
Ennio Morricone’s rich and vibrant score was released on CD in 1995. In collaboration with Sony Music Germany, we are proud to re-release it with detailed liner notes by Stephan Eicke, featuring Christopher Slaski’s precise transcription of the film’s main theme for study purposes. The 40th CD-release of Caldera Records also features elegant artwork by Luis Miguel Rojas. The CD was produced by Stephan Eicke and John Elborg.

“Gorgeous! (…) Caldera Records got the great opportunity to re-release a classic that is a hard one get your hands on. It’s time for you to seek this one out, it’s glorious piece of cinematic history and will be forever a classic.”
JMH Digital

“It is essentially one of the composer’s minimalist scores, however its so deftly arranged that it never seems that austere, its sonic patterns constantly imaginative and interesting, offering a fascinating treat for the ears.”
BuySoundtrax

“Morricone shifts and changes from track to track, which helps to hold the listener’s attention. ‚Chitarre‘, for example, is an interesting duo for Spanish Guitars. And pieces like ‚Manifestazioni‘ manage to wonderfully draw all the score’s influences and styles together in a spectacular fashion.”
Review Graveyard