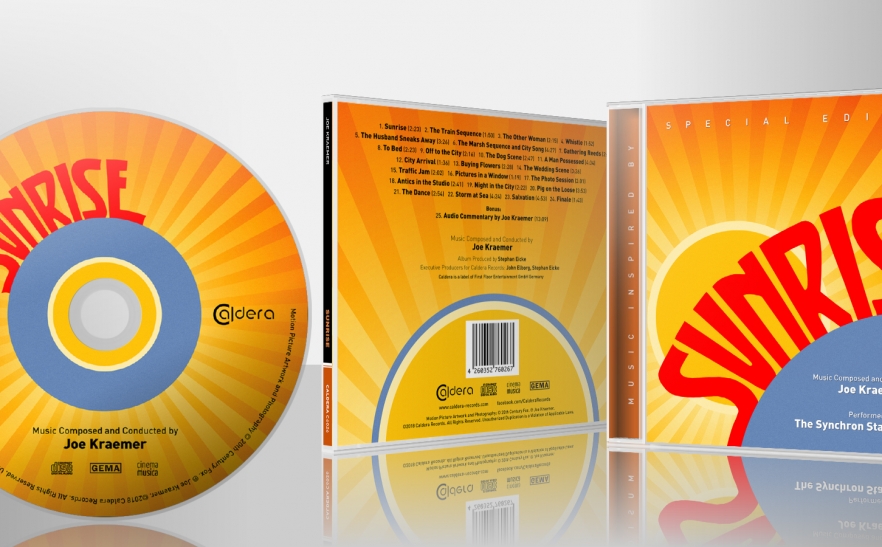 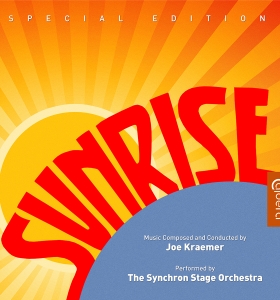 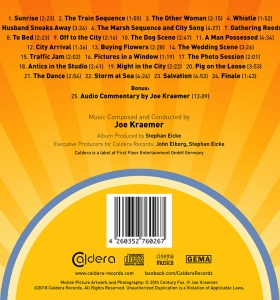 Caldera Records is proud to present the new score for the motion picture “Sunrise” from 1927, directed by F.W. Murnau, featuring music by Joe Kraemer, commissioned by the Dallas Chamber Symphony.
Featuring enormous stylized sets in order to create an idealized view of the world, “Sunrise” tells the story of three characters with no real names given. The Man and The Wife had been living happily on their farm until the appearance of The Woman From The City, who seduced the husband prior to the beginning of the story. In order to get rid of the farm that is tying The Man to country life, The Woman From The City convinces him to get rid of The Wife by staging a boating accident. When The Man realizes he is unable to commit the deed, The Wife flees to the City. He follows her and they rediscover their love for each other in the exotic world of the City.
In 2016, Joe Kraemer got the chance to prove himself as a masterful composer for silent film when he was commissioned by the Dallas Chamber Orchestra to write an original score for Murnau’s masterpiece. In terms of the overall picture, Kraemer shares his inspirations: “I created themes for each of the major characters and concepts in the film, and then used those themes to carry out the plot of the film. It is a highly programmatic composition. I was influenced by composers like Copland, Gershwin, and Strauss. Additionally, I had just finished a three-week stay in Austria when I began writing the score, and I was very influenced by the culture I experienced in the wonderful town of Baden.”
The score had its world premiere, live-to-picture, in Dallas in October 2016, where it was conducted by Richard McKay. It had a second performance in August 2017 in Baden, Austria, where Kraemer himself conducted it live-to-picture with members of the Synchron Symphony Orchestra. A few weeks after the live performance, the orchestra reconvened at the Synchron Stage in Vienna to record selections from the score for this CD release. The 26th CD-release of Caldera Records features a detailed booklet-text by Gergely Hubai, an exclusive audio commentary by the composer, and elegant artwork by Luis Miguel Rojas. The CD was produced by Stephan Eicke and John Elborg.

“It’s necessarily a wall-to-wall but Kraemer keeps it constantly interesting; it’s also necessarily a small ensemble of approximately fifteen live players, but their work is deftly orchestrated and the small size accommodates the music with a very intimate presence, and a gorgeous main theme that opens from a few tentative rays before emerging fully into the glory of its melody – just like a sunrise. [...] In its entirety as well as most of its more intimate musical moments, Joe Kraemer’s SUNRISE is a completely captivating work.”
BuySoundtrax

“[SUNRISE] is structured around three central themes, one for the protagonist, delicate and fragile (wife), the other frivolous and self-assured (the lover) and the third one ambiguous (husband). These three themes are developed, creating a narrative for various situations. The score has moments of great intensity.”
MundoBSO

““Sunrise” is a clever blend of orchestral and jazzy, a delightful assortment of symphonic dialogues and surprises and, if you want, a composer out-desplating Alexandre Desplat on his own often quirky orchestral turf. Do not miss this one.”
SoundtrackDreams

“It’s always a joy when we receive the latest score from Caldera Records. I like to clear my schedule so that I can just soak up the music without any distractions. I’d probably stick my neck out and say that this is their finest release to date. Joe Kraemer’s music is uplifting, memorable and energetic – not to mention diverse. A truly beautiful and memorable soundtrack. I don’t know how Caldera can top this one.”
ReviewGraveyard

“A charging rousing score, filled with plenty of high points and great amount of my favorite horns. Joe Kraemer like everything attacked this project and brought it too life and Caldera Records again amazes me, again and again!!”
JMHDigital.com