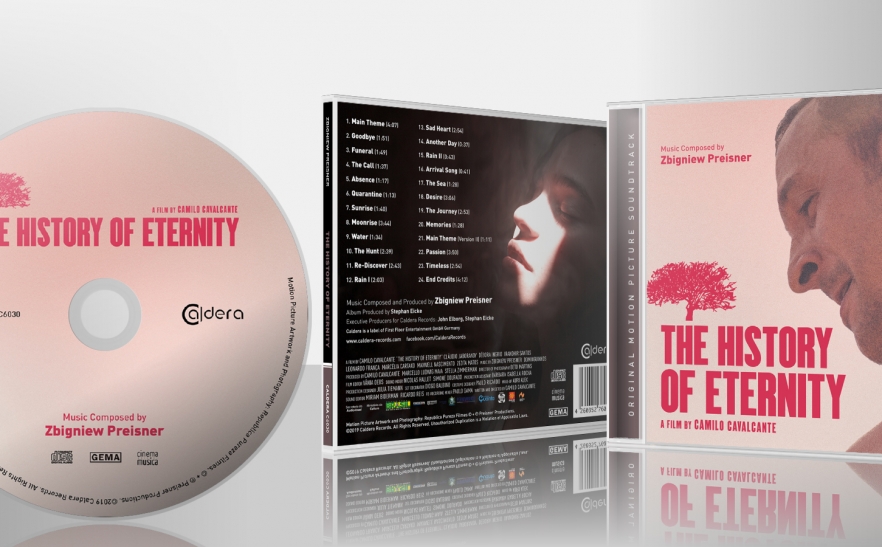 THE HISTORY OF ETERNITY 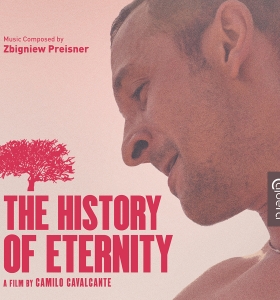 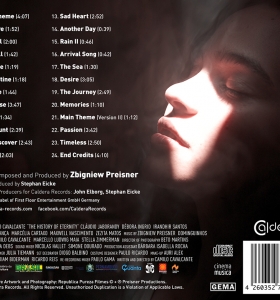 Caldera Records is proud to present the score for the motion picture “The History of Eternity” from 2014, directed by Camilo Cavalcante, featuring music by Zbigniew Preisner.
The History of Eternity tells of not one, but three love stories. The focus is on three women: one of them is a teenager (Débora Ingrid), the second one is in her 40s (Marcélia Cartaxo) while the last one is in her 60s (Zezita Matos). The male cast consists of Bahian musician Léo França playing a blind accordion player. Irandhir Santos portraying a Sertanejo artist suffering from epilepsy. Claudius Jaborandy offers a counterpoint to these artists as a rather pragmatic man more concerned with material goods. The three stories happen simultaneously and intertwine, but are given separate titles: Chicken Foot, Goat Foot and Urubu Foot.
Since two of the three main characters play musicians (and one of them is a musician in real life), it’s only natural that music becomes an integral part of the story. Preisner provided music that Cavalcante described as something that lent some Eastern European melancholy to the film. One of the key ideas of the score is using the guitar, which actually ties in together with the story and the usage of songs in the narrative. There is a very strong culture of so-called “Sertanejo” music which could be best described in terms of how country music is regarded in the United States. The score was awarded the Cinema Brazil Grand Prize, the Brazilian Oscar.
The 30th CD-release of Caldera Records features a detailed booklet-text by Gergely Hubai and elegant artwork by Luis Miguel Rojas. The CD was produced by Stephan Eicke and John Elborg.

Reviews:
“The History of Eternity… sweeping with a gliding gentleness and another superb masterpiece by legendary composer Zbigniew Preisner released on Caldera Records. Finding it’s way into your heart, every track brings a moving whisper into the light and we are drawn to see it from the darkness. This album plays heavy on the guitar and the theme that keeps you moving from start to finish and holds my attention.”
JMHDigital

“There’s not a wasted second of music here. The composer expertly weaves his themes (although you have to give Caldera credit for sorting them into in a naturally fluid order that ensures that they build as the album progresses) to become an integral part of the movie experience, yet being strong enough to stand on their own two feet outside of the film.
Another beautiful release from a record label that cares about soundtracks as much as the fans. This is yet another score I’ll be revisiting for years to come.”
Review Graveyard

“It has a beautiful main theme and motifs of similar approaches in their economy, their beautiful nakedness and emotional sense of love for life.”
MundoBSO

“A História Da Eternidade is a typically excellent Preisner score, even if the film itself has some issues. Not quite on the level of Skyggenes Dal, but with much of the same DNA – heartbreaking, high-pitched melody lines, slow and beautiful chord modulations and ‘spacey’ use of a relatively small musical ensemble. Hopefully, this premiere release, and Caldera’s “Preisner project” in general, will allow more people to re-appreciate the composer’s film work, post-Kieslowski.”
Celluloid Tunes

“Two of the three characters in the story play musicians, so music is also an integral part of the film story, but its use as score remains reserved. Midway through a few tracks such as “The Hunt,” “Re-Discover,” “Rain 1,” “Rain 2,” “Arrival Song,” “The Sea,” and “Main Titles Version 2,” the music grows a little livelier and poised, allowing the piano, violin, and guitar to imbue a heartier tone, and by the “End Credits” the melody, if not fully impassioned, emerges confidently in its most enriched resolve. It’s a very interesting score, harboring intimate beauty in its austerity.”
BuySoundtrax