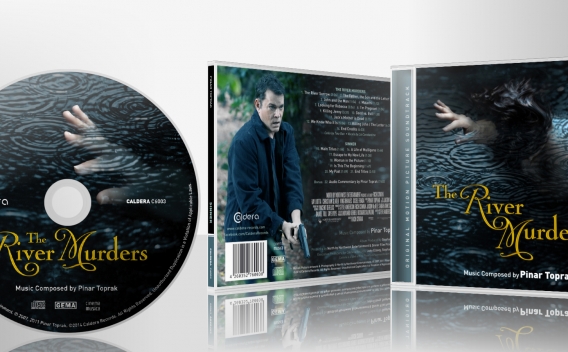 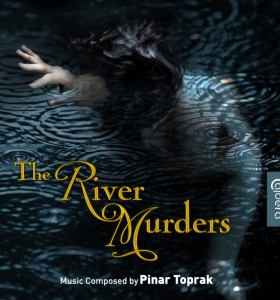 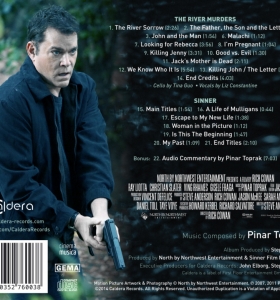 Caldera Records is proud to present the original scores for the US-thriller The River Murders from 2011, starring Ray Liotta and Christian Slater, and the independent-drama Sinner from 2007 by director Marc Benardout. Both movies feature an elegant soundtrack by Turkish-born composer Pinar Toprak (The Lightkeepers, The Challenger) who is one of the most promising new stars in the film music-scene. Her score for The River Murders is both tense and tender, evoking a strong atmosphere with its lush, memorable main theme, the serene vocals by Liz Constantine and the virtuosic cello-solos by renowned musician Tina Guo who is not only famous for her playing in heavy metal- and classical-concerts but also for performing on countless film scores. The (short) score for Sinner is a sorrowful elegy, featuring violin- and cello-solos to perform the tragic themes which not only fit perfectly to the mournful mood of The River Murders but deserved to be heard outside the movie despite their short running-time. As usual, our CD-release includes an audio-commentary by the composer as a bonus where Pinar Toprak talks about her start in film music-business as well as her approach to composing these two scores. Furthermore, the third release of Caldera Records features a detailed booklet-text by Gergely Hubai and elegant artwork by Luis Miguel Rojas. The CD was produced by Stephan Eicke and John Elborg.

“The music was composed by the Turkish-born Pinar Toprak, whose The Lightkeepers I was very fond of a few years back.  Her compelling score is impressive.  The main theme is introduced in “The River Sorrow”, highlighted by a haunting cello solo; even better is the religious sound presented in the proceeding “The Father, the Son and the Letter”, whose choral stylings bring to mind similar music by the great Georges Delerue.  It’s highly impressive music.  Toprak paints a portrait of a tormented soul: sorrowful, mournful.  It’s frequently very beautiful and culminates in the outstanding “Killing John / The Letter”, which packs quite the emotional punch.  Budgetary constraints meant that (aside from the cello and a solo voice) the score was performed by samples, but to be honest the quality of those samples (and indeed of the music) is so high it took me a few minutes to even notice.
As a bonus, the album also includes the composer’s brief score for 2007’s Sinner, a low-budget drama about a priest and a troubled woman.  Toprak’s music is cut from the same cloth as The River Murders, with another gorgeous main theme this time highlighting violin as well as cello.  There’s a slightly brighter feel this time to some of the music, with a soaring secondary theme of the highest quality.  It’s a very short score but the perfect complement to the album’s main feature.  As has become customary, Caldera’s album ends with an “audio commentary” from the composer, which I think is a terrific idea.  This is a fine album, showcasing impressive music by a very promising composer who is hopefully destined for a very successful career as a film composer.”
James Southall, Movie-Wave.net

“With a remarkable talent for expressive poignancy and melodic phrasing, Toprak’s score for THE RIVER MURDERS (aided by cello solos by Tina Guo) provides a haunting musical atmosphere for this 2007 murder thriller starring Ray Liotta and Christian Slater. Fragile melodies float across the music’s surface, enhanced by misty choral flavorings, while beneath the musical waters lie deep, foreboding tones of strings, keyboards, wisps of high soprano melisma, and a pervasive reverberating heartbeat of timpani.  There is a strong, unhappy religious tone that runs throughout the score, which is a theme for John and his misguided motivations for killing, which oddly enough is the most beautiful music of the score.  Elsewhere, Toprak builds a sinewy tonality of apprehension and unease which settles palpably into the soundscape, but which ultimately is overcome by John’s theme at the film’s climactic turning point, growing with a hymnlike fragrance into a striking atmosphere of sheer choral beauty.  The dozen tracks from THE RIVER MURDERS are followed by seven from the 2007 drama, SINNER, a very compatible score which is also softly atmospheric and largely string-based – and based on MIDI samples with solo violin and cello overlays.  As with the first score, the music for SINNER captures an elegant but uneasy spiritual dimension associated with the conflict of the soul faced by the priest; at the same time the score’s orchestration suggests the rural environment in which the story occurs. These are both scores of sublime loveliness, both center on a religious/spiritual connotation inherent within the film.  Despite SINNER’s coming very early in Pinar’s career, it shares the same sense of mature sincerity and confidence – and serenity of melody and expressiveness – with the other score, five years and 18 scores later. With more than 30 feature film scores to her credit, Toprak is still an emerging composer on her way to the A-list, even though her work is among the most heartfelt and sincerely poignant music to come out of a hybrid arrangement in a long time.  This affecting album has my highest recommendation, with thanks to Caldera for making it happen.”
Randall Larson, Buysoundtrax.com

“Beautiful and very elegant lyrical soundtrack with a remarkable main theme in which we have the prominence of the piano, cello and violin as main instruments, which evoke an apparent calm and placid tone, very evocative, with a moderate painful dramatic point.”
Conrado Xalabarder, MundoBSO.com

“The Turkish composer strikes again with this fantastic duo winner as a mix between Goldsmith and Young, scores with a deadly beauty accented with heavenly voices and chilling strings. A shock.”
Olivier Soudé, Underscores.fr

“After their impressive initial releases of Guy Farley’s “Secret Sharer” and Johan Soderqvist’s “King of Devil’s Island,” Caldera Records continues to show excellent taste in finding subtle, yet powerful scores from composers of creative note – especially when it comes to their work for movies that might have flown under the radar. Now Pinar Toprak’s “The River Murders” sounds off with such tragic, heavenly resonance that you could easily have imagined this as the score for “Mystic River.” But it’s a testament to her music’s melodic production value that you wouldn’t expect this score as belonging to a 2011 straight-to-DVD murder mystery about a cop whose lovers keep dropping dead. The detective’s conscience gets a gorgeous dose of Catholic guilt via this Turkish programming protégé of Hans Zimmer who’s steadily making her own, impressive way up the Hollywood ladder. While “The River Murders” marks Toprak’s second CD release after her lyrical soundtrack to “The Lightkeepers” (on Movie Score Media), the composer has actually been quite prolific in smaller film and TV features like “Behind Enemy Lines II” and “Breaking Point” (with Dean Devlin’s big budget disaster movie “Geostorm” to come). The richly melodic quality that marks Toprak’s work is especially easy to hear in “The River Murders,” as she invests the score with one gorgeously tormented cue after the other. Mournful solos for the cello (played with haunting beauty by Tina Guo) and the piano are complemented by a superbly sampled orchestra. With lullaby bells to boot, Toprak’s thematic work begs comparison to such seminal Christopher Young scores as “Copycat” and “Jennifer 8,” both playing feminine perspectives on body count suspense. However, Toprak’s point of view here is through Christian Slater’s FBI agent as he tries to unravel the professed innocence of Ray Liotta’s homicide detective as to the floating pile of past amours. Toprak has a skillful way of balancing these womens’ ghostly voices with a religioso sense of contrition, using creeping strings and outrightly violent musical action for outright horror score shocks. But whatever Toprak’s method of generating dread, “The River Murders” are certainly the work of killing the listener softly, and with an eerie reverence for its victims that a serial killer would admire.”
Daniel Schweiger, Filmmusicmag.com

“The central solo instrument is cello, wonderfully performed by Tina Guo who I think we have all heard at some point. She actually takes the music and lovingly purveys it via her cello giving it heart, soul, depth and substance and also via her performance adds real passion to the proceedings. The second soloist is Liz Constantine who provides the haunting vocal performance on the score. Guo’s heartfelt cello performances combine with Constantine’s unblemished vocalizing on occasion within the score to create a wondrous sound that manages to invade the listener’s inner being, the most expressive performance that showcases both the performers talent is for me track number 12, END CREDITS, where we are also treated to a celestial sounding choir. It is also Guo’s performances throughout the score that bring the whole thing together, her sorrowful and poignant sound acting as a bridge between the more dramatic and atonal sections of the score. Of course the score does also contain a number of darker and more ominous sounding passages which are largely atmospheric but still contain some thematic properties, Toprak subtly hinting at a more serious, chilling and fearsome atmosphere, with a sprinkling of piano that is underlined by a faint but threatening background. This is a highly emotive and expressive work, and one that you will love. The compact disc also contains the composers score for the 2007 production SINNER, which is also a delight, mesmerizing violin and piano are the main stays of this work, and together and also as solo performances offer up a richness and luxuriously melancholic sound that is hauntingly beautiful. Again I am sure SINNER will delight all who listen to it. A wonderful release from Caldera containing two infectiously attractive works. Also includes a 7 minute audio of the composer talking about her career,and informative liner notes courtesy of Gergely Hubai with a number of stills from The River Murders. Please do not miss this one.”
John Mansell

“The music is delicate and loaded with force at the same times. An authentic gift!”
Fernando Fernández, BSOSpirit.com

“This score stroke a chord with me from its first moments. I cannot resist a great cello solo and Tina Guo shatters my insides with her performance. The music is moving, elegiac and deep and I am pulled inside this score without delay. “The River Murders” sounds exactly how I would have imagined it for a subject like this and I like listening to it because the experience is rich and rewarding. That cello is the light guiding us through the darkness of the score and comes in on almost every track. When it does, everything else goes silent…“The River Murders” is dark. Some moments show some hope, others are just elegiac with heavenly choirs while others could very well find their place on a horror score. The sound is ominous and cold and you will feel uncomfortable in many moments. But then the cello comes and you will be addicted…”
Soundtrack Dreams.com

“The mood Toprak creates is a great one. It’s dark, but not without specks of light and hope. I love the way Toprak use the cello for good, evil and everything in-between. I have to credit Tina Guo who gives us those delightful cello solos. There’s so much emotion in her playing that I could easily listen to that all day. The River Murder is a delight, a classy thriller score. The solo cello by Tina Guo is making a big difference and this score is ful of emotions. It might not be a movie that’s well knows, but this score is a must listen.”
SoundtrackGeek.com