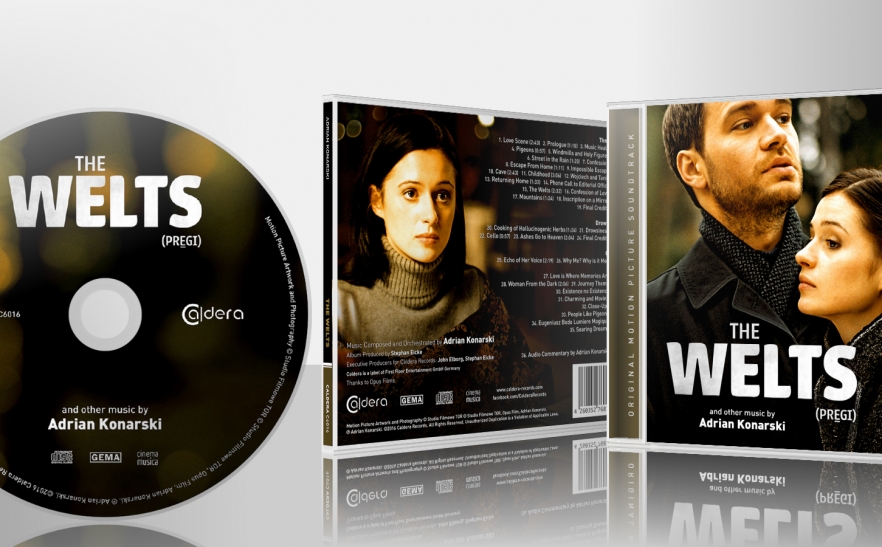 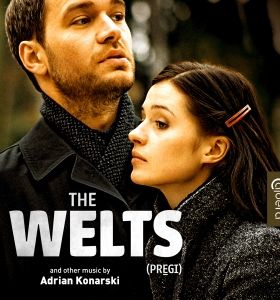 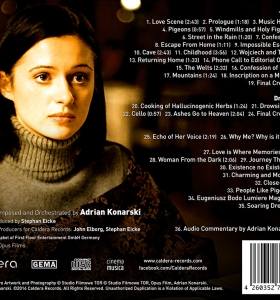 Caldera Records is proud to present the original score for the motion picture The Welts (Pregi) from 2004, directed by Magdalena Piekorz and starring Michal Zebrowski and Agnieszka Grochowska. The Polish movie tells the tale of Wojciech who was mistreated by his father at a young age and as a result becomes increasingly troubled when growing up. Although he does not want to repeat the same mistakes his father did, he has problems connecting to people. Then he meets Tania, his chance for redemption. But will he be able to solve his problems and become somebody who can not only love but who can also be loved by others?
The music for the directorial debut by Magdalena Piekorz was composed by Adrian Konarski, a highly regarded musician for films, theater and concert in his native Poland. These Polish roots are evident in his music, bearing resemblance to work of his native countryman Wojciech Kilar in their melodic inspiration, thematic development and transparent arrangements. Performed by a small orchestra with haunting instrumental solos for piano and woodwinds, the music for “The Welts” is full of melancholy and yet offering a glimpse of hope for the troubled character of the movie. Konarski works with several themes and motifs such as a love theme which receives its variations throughout the score.
Furthermore, Caldera presents several other works by Adrian Konarski, mounting to a running time of 80 minutes in total: Drowsiness and Citizen are two other elegiac scores for movies by Magdalena Piekorz, performed by orchestra and soloists such as a mesmerizing soprano. Several other pieces also assembled on this compilation were written by Konarski for different projects, offering a vast variety of melodies and styles.
As a bonus, we included an exclusive audio commentary by the composer where he talks about his work. The 16th CD-release of Caldera Records features a detailed booklet-text by Gergely Hubai and elegant artwork by Luis Miguel Rojas. The CD was produced by Stephan Eicke and John Elborg.
The Welts
1. Love Scene (2:43)
2. Prologue (1:18)
3. Music is Healing (1:22)
4. Pigeons (0:57)
5. Windmills and Holy Figures (1:52)
6. Street in the Rain (1:20)
7. Confession (1:12)
8. Escape From Home (1:11)
9. Impossible Escape (1:31)
10. Cave (2:43)
11. Childhood (3:56)
12. Wojciech and Tania (1:22)
13. Returning Home (1:33)
14. Telephone Call to Editorial Office (1:13)
15. The Welts (2:32)
16. Confession of Love (2:11)
17. Mountains (1:24)
18. Inscription on a Mirror (2:18)
19. Final Credits (3:14)
Drowsiness
20. Cooking of Hallucinogenic Herbs (1:24)
21. Drowsiness (2:09)
22. Cello (0:57)
23. Ashes to the Sky (2:04)
24. Final Credits (3:47)
Obywatel
25. Echo of Her Voice (2:19)
26. Why Me – Why Only Me? (1:52)
27. Beautiful Sweet Epic Reflection (2:28)
28. Woman From the Dark (2:06)
29. Theme of Journey (3:08)
30. Existence no Existence (1:42)
31. Charming and Moving (3:01)
32. Close-Ups (3:38)
33. People Like Pigeons (2:19)
34. Eugeniusz Bodo Lumiere Magique (2:06)
35. Soaring Dreams (3:35)
Bonus:
36. Audio Commentary by Adrian Konarski (3:35)
Listen to a 5 min clip here:
SoundCloud

“Composer Adrian Konarski, a highly regarded musician for films, theater and concert in his native Poland, provides a sumptuously classical composition, rich in melancholy while still circulating with a glimpse of hope for the troubled character.”
Buysoundtrax.com

“A well done score. It has a certain level of loveliness with a strong piano presence, that ties it into a grand release and holds your interest throughout.”
Six Strings

“The Welts, which opens the album, is full of bright romance with a delicate orchestration. The other scores are showing the same sensitivity but are quite different in style. Congratulations to Caldera for another strong album!”
Underscores.fr

“I cannot recommend this release enough or tell you how much I love it, it is one of those releases that comes along when you are not expecting it and completely blows you away, please go and buy this asap.”
Movie Music International

“This is a beautiful album and Konarski delivers some incredibly moving themes.”
ReviewGraveyard.com

“Caldera Records continues to build a fantastic reputation of finding hidden gems past and present for us to enjoy. The Welts is a wonderful score by Adrian Konarski, it’s such a delicately handled narrative that explores character emotions on the surface as well as deeper. Which is great, because we are learning about our protagonist and who he is currently, and then move deeper to learn what he went through in his past. This album offers some other music from Konarski’s other scores, so we get a nice sampling of what he offers as a composer. If you’re looking for a pure unfiltered musical voice that hasn’t been corrupted by Hollywood temp tracks, The Welts is worth your while.”
FilmMusicMedia.com

“A dramatic and romantic soundtrack with emphasis on the piano which is used to express the inner voice of the protagonist: his desolation and despair, but also his desire for liberation and his need for reconciliation are described in the music. The moving music is very rich in its expressions.”
MundoBSO.com

“Konarski’s music is wonderful, full of European flair. This album serves as a great introduction to this composer, who I personally had not heard of before. I now look forward to hearing more Konarski in future.”
Synchrotones