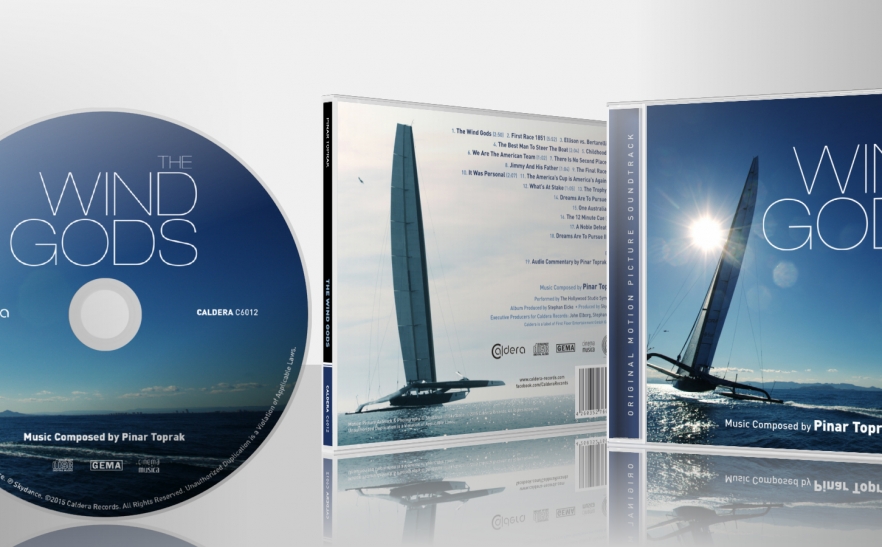 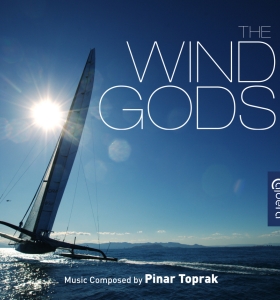 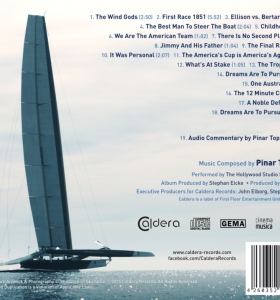 Caldera Records is proud to present the original score for the American documentary The Wind Gods from 2011, composed by Pinar Toprak. The movie chronicles the 10 year quest of famous entrepreneur Larry Ellison who set sail with his ‘Oracle’ to win the America’s Cup and therefore bring the prestigious sailing prize home to the US after it had been won by foreigners in the past years. The documentary which is both an adventure, an insight into the mindset of the well-known billionaire and a love letter to sailing, is narrated by Jeremy Irons and features the magnum opus by its composer Toprak. The Turkish-born musician delivered a grand, sweeping and epic score which shows how exciting the music for a documentary can be: filled with several memorable themes, a detailed orchestration and a lot of swashbuckling action, the music brims with masculine forces and female sensibilities. Deservedly, Toprak was awarded the IFMCA award (International Film Music Critics Association) for Best Documentary Score in 2011 and trumped out prestigious colleagues like George Fenton and Patrick Doyle for their efforts that year. This is no surprise: recorded with the 70+ piece Hollywood Studio Symphony conducted by Jerome Leroy, The Wind Gods is a vivid, thematic and diverse score worthy of the biggest Hollywood epics. As a bonus, we included an exclusive audio commentary by the composer where she talks about his work. The twelfth CD-release of Caldera Records features a detailed booklet-text by Gergely Hubai and elegant artwork by Luis Miguel Rojas. The CD was produced by Stephan Eicke and John Elborg.

“Pinar Toprak’s “The Wind Gods” is a beautifully lush orchestral score, full of excitement and admiration for the sailors. And though the journey ends on a somber note, there are plenty of exciting action cues and noble themes along the way. In the audio commentary, Toprak talks of her love for the ocean, how inspiring the images are, and how majestic the boats are. She successfully translates those feelings into her music. Without ever going over the top, her score is heroic, passionate and exciting. It is, indeed, timeless.”
Synchrotones.Wordpress.com

“Caldera once again shows Toprak’s way of catching soaring, excitingly melodic gusts with their release of her sumptuous score for the 2013 American Cup documentary “The Wind Gods.” Given that she’s playing the do-or-die effort of Oracle zillionaire Larry Ellison to win this sport of sailing kings, no expense has been spared in filling The Hollywood Studio Symphony’s canvas to push this music to the listening win. Given lush, exceptionally well-defined themes rhythmically pushing the boats forward (especially well interplayed in the aptly named “12-Minute Cue”), Toprak also beautifully captures the blue environment with contrasting moments of still lyricism, a lushly poetic sensibility that brings to mind Thomas Newman’s bucolic Americana style in the best, competitive way. “The Wind Gods” is as exciting as it is emotional.”
FilmMusicMag.com

“This music flows lightly with all its elegant moments like the beautiful main theme.”
MundoBSO.com

“Sweeping, yet powerful score from composer Pinar Toprak who I am coming to discover that she is a world of talent…”
JMHDigital.com

“Its large-scale presentation, recorded with the 70+ piece Hollywood Studio Symphony conducted by Jerome Leroy, gives it a marvelous scope and presentation, and makes for a completely satisfactory and compelling home listen.”
BuySoundtrax.com

“This music excites me beyond acceptable levels. I am digging this totally inspiring music, and I have no shame in doing so. It’s not a guilty pleasure, it’s the ultimate pleasure where I can just love what I’m doing right now and that’s listening to this gem. I simply love what I’m hearing. It’s a score that I am happily listening to again any day at any time. It’s a score that deserves an official release and now we have it. Enjoy!”
SoundtrackGeek.com

“I’m used to Pinar Toprak’s deep emotional scores so I am very happy to discover here her more adventurous musical side. The furious strings fight with the horns to give us action and suspense and I am having a great time listening to this score. Did I say emotional moments? “The best man to steer the boat” seals the deal for me. How can a heart not sing when it hears such a beautiful cue? This is all about Pinar Toprak and the journey she creates for us as listeners. Once again she has delivered a musical flower to put in an ever growing garden. I hope soon all her releases get the treatment this one got.”
SoundtrackDreams.com