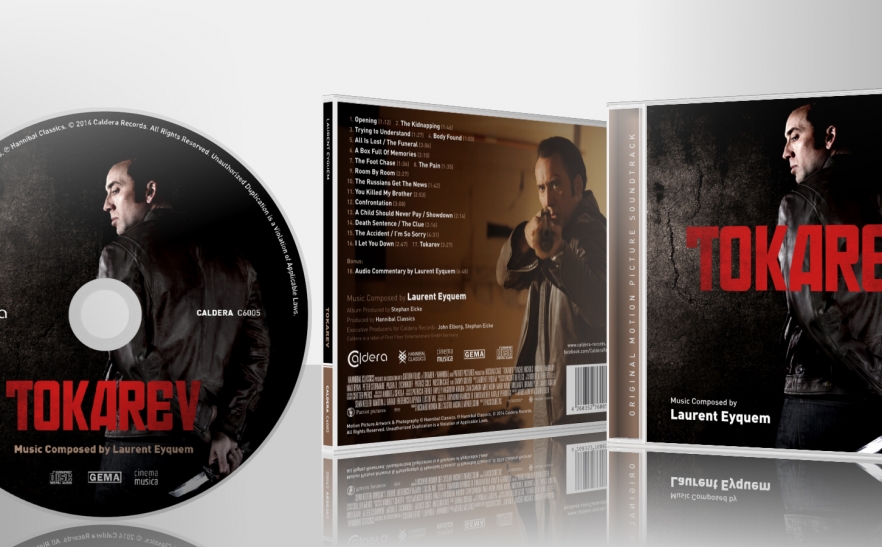 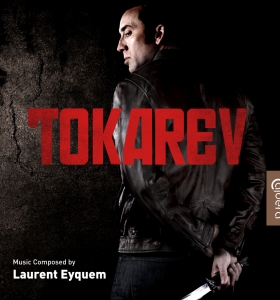 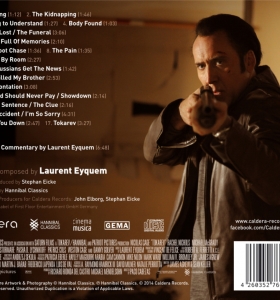 Caldera Records is proud to present the original score for the thriller Tokarev from 2014, starring Oscar-winner Nicolas Cage and featuring a score by newcomer Laurent Eyquem who gained much attention with his scores for both Copperhead and Winnie Mandela in 2013. As with these previous works, in Tokarev Eyquem concentrates on the dramatic aspects of the story, presenting lyrical themes for strings to capture the suffering of the main character Paul Maguire (Cage) who seeks revenge for the death of his young daughter in battling the gangsters who are responsible for her untimely passing. The action is underlined by an eclectic mix of electronics and orchestral elements, evoking a driving force which keeps the entertaining, diversified score forward. As a bonus, we included an insightful audio-commentary by Laurent Eyquem who talks about career and the concept of this specific score. The fifth CD-release of Caldera Records features a detailed booklet-text by Gergely Hubai and elegant artwork by Luis Miguel Rojas. The CD was produced by Stephan Eicke and John Elborg.

“The first time I heard Laurent Eyquem,s music was for the movie COPPERHEAD, which got me hooked straight away, well I say hooked more like interested and fascinated that a composer such as this I had not heard of before. I then heard a few more of his works that were for in the main movies produced in South Africa and the composer very kindly sent me a download of his score for WINNIE MANDELA, this led to an interview with him and then I realised just what a great talent he was. One of his latest assignments is RAGE-TOKAREV which is a tense action thriller starring Nicholas Cage. The score for this drama is a multi coloured and varied styled score which seems to encompass an entire palette of sounds and musical textures during its running time. Poignant and touching tone poems are accompanied by nervously tense and highly combustible tracks which have at their core thundering percussive elements that drive headlong at a break neck speed to create that edge of the seat tension that is required in movies such as this as in track number 2, THE KIDNAPPING and track number 3, TRYING TO UNDERSTAND which are veritable smorgasbords of sounds both symphonic and synthetic, but the composer fuses these in such a way that they compliment and embellish each other to heighten the drama and create a thrilling and relentless composition. I was struck by the fact that even the more robust and action led cues remain musical and melodic throughout, the composer creating dramatic and powerful cues that are dynamic and pulsating but have solid thematic properties. The score does have a particularly attractive central theme which is at times performed by piano and also is give a fuller and more expanded work out by the string section who give the theme a sweeping, luxurious and lavish sound. This is a score that I recommend you add to your collection, and while you are listening to it make sure you have your pc on to go to one of those well known sites that sell music because as soon as you hear the artistry and the richness and the freshness of Laurent Eyquem, s music you will be looking for more of the same.”
John Mansell

“Laurent Eyquem deservedly got a lot of positive attention last year for his rich, moving scores for Copperhead and Winnie Mandela – traditionally orchestral, emotion-based scoring.  It’s interesting therefore to find out what he can do with a very different kind of film and (obviously) he has written a very different kind of score, with two distinct sides to it that blend together well.  The first side is the very modern electro-thriller music he wrote for the action and suspense sequences, which sounds a little like an updated version of those great thriller scores Ennio Morricone wrote for films like this in the late 1970s and early 80s.  Electronics are very much at the fore, unstintingly oppressive and bleak, very effective and indeed impressive but often not really very pleasant. Fortunately the other side to the score is very effective and impressive and if not exactly pleasant (indeed much of it is somewhat harrowing) then certainly very listenable and emotionally rewarding, with some very dramatic and very moving music for the film’s more emotional moments.  In “All Is Lost / The Funeral” the composer expertly blends his requiem-like main theme with a brief extract from the Irish song “I’ll Take You Home Again, Kathleen” in a rather chilling manner (Eyquem’s theme is allowed to breathe by itself in the following cue, the outstanding “A Box Full of Memories”).  The pick of the action cues is probably “Room by Room”, a nailbiting piece of excitement; and on the occasions when the composer shines a light through the bleakness, such as the unusual combination of female voice and balalaika in “You Killed My Brother”, it’s seriously impressive.  The emotional highpoint is undoubtedly the moving end titles piece, a beautiful conclusion to the score.”
James Southall, Movie-Wave.net

“Following up his delicate orchestral scores to COPPERHEAD (reviewed in my July 2013 column) and WINNIE MANDELA, Laurent Eyquem has supplied an energetic and reflective score for this new direct-to-DVD revenge thriller, starring Nicholas Cage as a reformed criminal who reforms his old band to impose justice on the Russian mob who’ve kidnapped and killed his daughter.  A US/French co-production, the movie was released in the US under the title RAGE.  Eyquem favors orchestra mixed with electronics and voices to generate a pulsing, suspenseful score, while treating the film’s more intimate moments with gentle flavors of solo piano and soprano melisma.  The occasional use of balalaika and heavy male choir accommodates the film’s Russian association.   With an engaging primary theme that floats through orchestral and electronic variations alike, Eyquem crafts an insistent action/suspense rhythm through interactive strings and quavering electronic pulses, splendidly creating an urgent riffing for the film’s moments of string action (“Opening,” “The Kidnapping”), while imparting moments of pure acoustic string passages in their midst to reinforce the human element involved in the story.  Drum-beaten, rock rhythms swagger loudly (“Trying to Understand,” “The Foot Chase,” “Room By Room”) while the main theme’s empathetic lyricism underlines the results of violence, first from soprano and strings in “All Is Lost, The Funeral,” later with grief stricken piano in “A Box of Memories,” “The Pain,” choir, balalaika, and strings in “You Killed My Brother” and “A Child Should Never Pay,” and so on.  The result is a very effective action score that also reflects an honest humanity and poignancy in the midst of its vengeful propulsion; the mix of heartbreaking lyricism and brutal, mechanistic action makes for a compassionate commentary on what we’re seeing.  Eyquem’s main theme concludes the score in a fine summation from orchestra and choir (the film is told in a flashback; Eyquem thus wanted the main theme to be heard only in its fullest form at the end of the film, as a resolution to all we have seen prior to that); its evocative melody and harmonic construction quite pleasing and stirring, providing for what is otherwise a fairly generic revenge thriller a sympathetic and thoughtful musical overlay.  The music is nicely preserved on disc by Caldera; continued evidence that Eyquem is a composer worth listening to.”
Randall Larson, Buysoundtrax.com

“A really well produced package that really features some excellent work by the composer who’s rising starwise and with good reason. It is a score that really works well with the film and with good reason and that reason is that it is fresh and energetic and doesn’t try to overwhelm you too much. “Rage” is a very entertaining score that will help the rise of composer Laurent Eyquem to the forefront of future projects in Hollywood. Thumbs up.”
Danny Gonzalez, The Examiner.com

“An action score which is percussive and nostalgic at the same time, incorporating all modern idioms without developing into sound design or simple electronics. Tokarev is awesome!”
Underscores.fr

“Eyquem’s music poignantly captures “Tokarev’s” wages of sins as Cage is pulled into his inescapable descent into revenge. Lush, anguish-filled strings, delicate piano and the darkly angelic female voice of a dead daughter give no sense of pleasure, though they are certainly melodically rewarding to listen to. But when it comes to tailing the (always) Russian malefactors and getting behind the wheel for the big car chase, Eyquem knows well enough to break out the stalking, cimbalom-topped samples and rocking, percussive ammo. Eyquem’s unabashedly woeful approach ends up being a real thing of melodic beauty in “Tokarev.” He hears its Cage-isms as things of sad, musical art, determined to go the pulp exploitation distance with a score that’s playing on a whole other level of drama. Props go again to Caldera Records for continuing their pattern of nicely designed graphics, informative liner notes by Gergely Hubai, and most noteworthy of all offering an audio addendum for the composer to explain their craft. Eyquem does so with truly heartfelt passion here as he reveals his own life’s tragedies that set him upon a fare more beatific course than Tokarev.”
Daniel Schweiger, Film Music Mag.com

“The music has heart and when I hear that in a composition I am involved and I care for what it tells me. The sorrow is raw and intense in the music (“The pain” is another haunting piece) and it almost makes me want to watch the movie. I might not though, because I wouldn’t want a bad scene to ruin an amazing piece of music. As the score progresses I feel it even deeper. The music is intense and piercing…. The Russian like choirs that come every now and then are haunting and fit right with the rest of the music and each cue pulls me even more into the story it tells. The entire score is heavy and depressing but with so much heart and depth that, paradoxally, it makes me happy. This chain is only broken by one amazing and determined action track “Room by room”. Nicolas Cage is probably tearing through walls trying to find the ones who kidnapped his daughter by the sound of this and I feel his immense rage. It is very easy for composers these days to fall into the generic music trap but Laurent Eyquem navigates these complicated seas brilliantly.”
Soundtrack Dreams.com

“Listeners who are only familiar with Eyquem’s lush work on scores like Copperhead or Winnie Mandela will be surprised to hear him writing in a much more modern idiom here; although the score is still predominantly orchestral, there are a great deal of electronic enhancement to be heard, often by way of rhythmic ostinatos and vaguely industrial sounding effects which lay on top of the music. Usually, this sort of thing annoys the heck out of me, but Eyquem does it with much more panache and artistry than many of his contemporaries – his obvious knowledge of the orchestra, and the way the two aspects of the score actually blend together rather than competing for dominance against each other, allows the score to breathe and develop naturally.”
Jon Broxton, Movie Music UK.us

“Right away I am very impressed with the action. ‘The Foot Chase’ is another great action cue. There’s so much energy here, and I haven’t heard Eyquem do this kind of music before. I love it.”
SoundtrackGeek.com