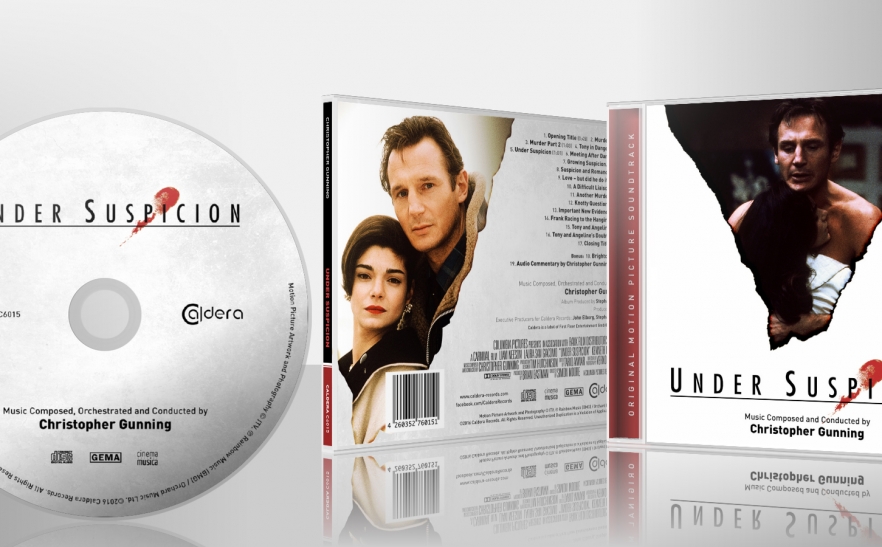 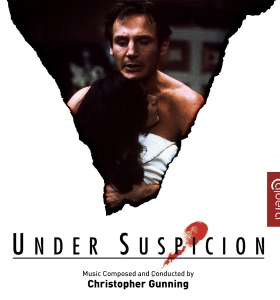 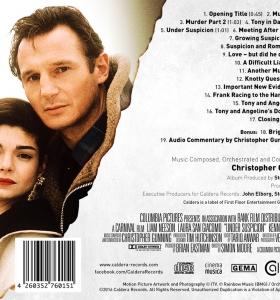 Caldera Records is proud to present the original score for the motion picture “Under Suspicion” from 1991, directed by Simon Moore and starring Liam Neeson, Laura San Giacomo and Kenneth Cranham. Neeson plays a former cop who now works as a private investigator whose main job it is to collect evidence of adultery for his clients who wish to settle divorce cases. Neeson’s character runs into trouble soon though when he orders his wife to go to a hotel room with a well known painter in order to take photographs of the two and sell them to the wife of the painter. Things get nasty when the pair is shot death – and one of the prime suspects is: the investigator himself. Christopher Gunning delivered one of his darkest, most brooding scores which at times evokes the spirit of Bernard Herrmann’s well known and much celebrated style to underscore suspense and enhance the already dangerous situations in the film’s scenes. Gunning wrote several themes and motifs, notably a love theme for Neeson’s and Giacomo’s characters which receives its variations throughout the whole score. The highlight of the score is undoubtedly the famous hanging sequence for which the composer wrote a 7 minute piece which builds steadily until it collapses at its climax and makes your adrenalin rush through your body. Deservedly, Gunning won an Ivor Novello Award for his work on “Under Suspicion” in 1991. This is the third entry of a Gunning score in the Caldera catalog. As a bonus, we included an exclusive audio commentary by the composer where he talks about his work. The 15th CD release of Caldera Records features a detailed booklet text by Gergely Hubai and elegant artwork by Luis Miguel Rojas. The CD was produced by Stephan Eicke and John Elborg.

“A romantic thriller score of great class. The passion of the main theme which recalls John Barry goes hand in hand with a morbid suspense that is reminiscent of Kilar or Goldsmith. The mix of orchestra and synthesizers is masterfully done. Brilliant!”
Underscores.fr

“It’s a classy thriller score with a melancholy main theme (predominantly performed by strings and winds) and some raw action material inspired by Polish avant-garde composers. There is wonderful writing and orchestrating on display here.”
Synchrotones.Wordpress.com

“A powerful soundtrack with a bright main theme that blends mystery drama and sensuality in the best tradition of black cinema. This main theme is developed with variations and transformations, changing the balance of its three main components, depending on the circumstances, and being supported by subtopics to emphasize the environment of mystery and danger. Gunning also highlights the bleak tone, at times fatalistic, included in both the main subject and at other times, and his beautiful final resolution. A work that is also very elegant.”
MundoBSO.com

“Christopher Gunning delivers a dark and brooding score for Under Suspicion. Gunning turns in a beautiful collection of themes and Caldera Records give it the treatment it so richly deserves. All soundtrack collectors should add this to their library.”
ReviewGraveyard.com

“‘Under Suspicion’ is a surprisingly engaging score which stands on its own even without the support of the on screen images. It tells me a story that doesn’t need more to be rewarding.”
SoundtrackDreams.com